These new results, including up to 630 g/t silver, 5.3 g/t gold and 1.17% zinc, confirm the polymetallic nature of the Ubeong mineralised system and indicates the potential for high grade silver-gold zones, while also supporting the potential prospectivity of the region based on previously identified high-grade zinc-silver mineralisation.

It should be noted that this is an early stage play and investors should seek professional financial advice before making their investment decision in this stock.

The location of the recently identified mineralisation relative to the historical Chilbo workings is shown below. 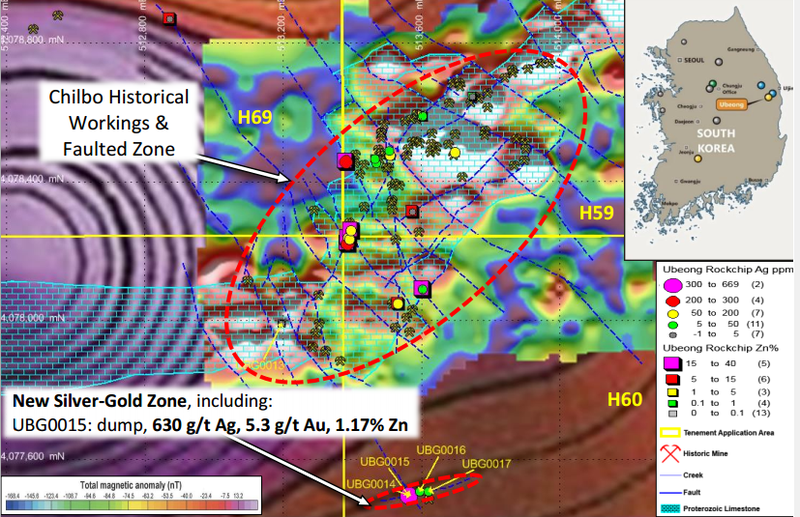 Commenting on near-term initiatives, PSM’s Chief Executive, Jon Dugdale said, “The accelerated program to define drilling targets at Ubeong is now well underway, and a total of 141 additional rock chip samples have been collected in the vicinity of the 70 additional historical mine workings identified during mapping”.

These samples have been collected over a one square kilometre area and will be submitted for a polymetallic range of elemental analyses including zinc, silver, copper and gold. A selection of results from the Ubeong zinc-silver project is listed below.

In addition to the rock chip sampling, detailed soil sampling has recommenced over the faulted Chilbo workings area at 100 metre by 25 metre spacing, and extended to cover the recently identified high grade silver-gold zone.

Initial soil sampling results included up to 2.1% zinc close to an area of workings (previous channel sample results including 2m @ 29% zinc), as well as a broader 100 metre wide polymetallic anomaly of more than 1,100ppm zinc, with supporting copper, lead, silver and other elemental analyses, that is associated with minor workings only.

The results of the systematic rock chip sampling and the detailed soil sampling will be compiled and interpreted to define drilling targets for high-grade zinc, silver and/or copper, and/or gold mineralisation. Additional geophysics including Induced Polarisation (IP) to directly target larger sulphide zones will also be considered in the course of refining drilling targets.

As illustrated below, PSM has secured three granted tenements and multiple tenement applications over the eastern 10 kilometre strike length of a highly prospective limestone-skarn unit that includes the historical Chilbo mine workings and adjoins the operating Kumho Zinc Mine. 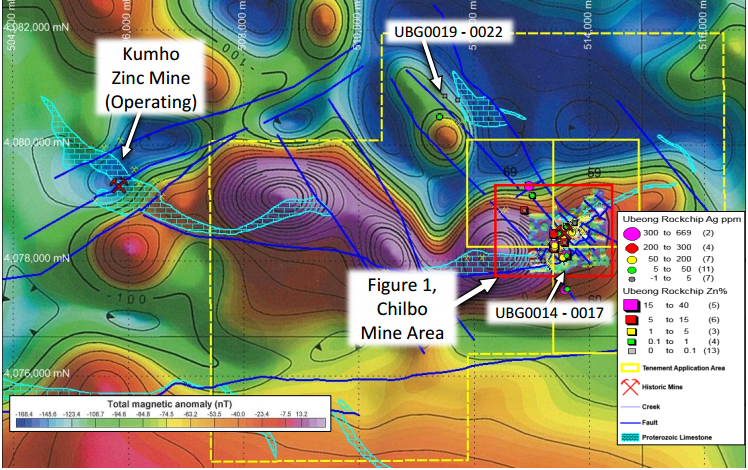