Peninsula Mines (ASX:PSM) has today provided an update on sampling results from the new Ilweol trend near the Ubeong Project.

New high-grade zinc, lead and copper sampling results have been recovered from a one kilometre corridor of extensive historical workings at Ilweol, which is four kilometres south of the Ubeong mineralised skarn deposit in South Korea.

The company has indicated that a total of seven rockchip samples – including five underground channel samples – have been located from the corridor.

The Ilweol workings are located near a significant historical processing plant at Yonghwa, which was operational until the 1970s.

The highly promising results are summarised below:

Peninsula Mines’ Managing Director, Jon Dugdale, commented on the results, “The discovery of the Ilweol trend presents the company with a new massive sulphide zinc-lead-copper target and further expands the footprint of the Ubeong skarn-porphyry mineralised system.”

It should be noted here that PSM remains a speculative stock and investors should seek professional financial advice if considering this stock for their portfolio.

A large section of the northwest-southeast trending Ilweol mineralisation falls within the already granted tenement Dogyedong 72 (as seen below). 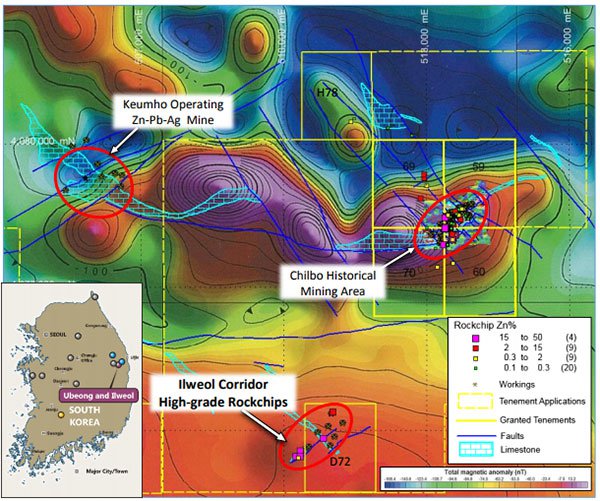 Further reconnaissance mapping at this location has identified northeast-southwest trending mineralised shear structures which are associated with mafic dykes.

Recently located channels all lie within PSM’s adjoining tenement Dogyedong 82, which has been the subject of a recent Mineral Deposit Survey (MDS), where a tenement grant is anticipated shortly.

The company has indicated that additional channel sampling will be followed by further tests to define drilling targets for the 2018 field season.

High-grade zinc-lead-silver and copper-gold rockchip and sampling results have been recovered from the Chilbo workings area that occurs towards the eastern end of the skarn deposit.

The company has also executed detailed mapping, ground-based geophysical and detailed soil sampling programmes, testing targets for disseminated to massive sulphide zinc-lead-silver or copper-gold mineralisation. A drilling programme is now in progress due to these tests.