On top of that, PSM has settled its recently completed, heavily oversubscribed placement, receiving funds to the tune of A$1.9 million. This places the company in an excellent cash position to continue its focused drilling program at Ubeong.

PSM has intersected two massive and blebby/disseminated zinc-silver and silver-lead-copper bearing sulphide zones in diamond drill-hole UBD0003 at its Tiger Target in the Chilbo historical workings area of the Ubeong Project. Results include:

Key sulphide zones from UBD0003 and UBD0002D1 are now to be sampled and submitted for full interval analyses at ALS in Perth as soon as possible.

PSM managing director Jon Dugdale said, “We have made great progress at our Ubeong Project over the last 12 months and the drilling is now intersecting the massive and disseminated sulphide mineralisation we have been targeting.

“Following assessment of the initial results the drilling will continue in Q1 2018, testing the interpreted core of this large-scale porphyry-skarn base and precious metals system.”

UBD0003 is now at >270 metres and continues to drill skarn/limestone with minor disseminated sulphides.

Selected sulphide bearing intervals in UBD0003 (and UBD0002) will be half-cored and submitted for multi-element analyses at ALS in Perth over the coming weeks.

The next hole, UBD0004, will commence after winter during the first quarter of 2018, and will test northwards under the most intense zinc and copper geochemistry at the eastern end of the Taipan Target.

PSM will target the magnetic ‘core’ of the porphyry-skarn system and under the six metre thick copper bearing massive sulphide outcrop at the Viper Prospect (shown below). 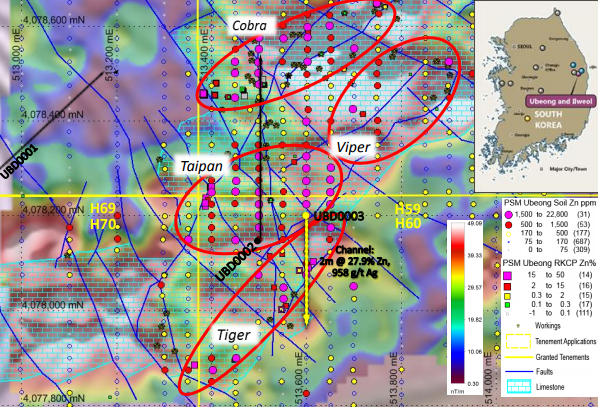 Equally positive news for the company is its announcement today that it has been settlement its recently completed share placement, with A$1.9 million received from the issue of 118.75 million ordinary shares to institutional and sophisticated investors.

“We are delighted by the overwhelming support of existing and new shareholders for this placement,” Dugdale said.

Funds raised will be used to continue the zinc-silver and copper-gold drilling program at Ubeong, to accelerate PSM’s graphite and lithium drill-targeting, and to complete graphite supply and offtake agreements.