This follows on from POW’s successful completion of Phase 1 of the comprehensive portable-XRF calibration and assaying program being conducted at the Daejon deposit.

An interim vanadium/uranium mineral Resource has been estimated across 40 per cent of the known Daejon strike length, representing a significant increase to the existing JORC 2004 vanadium Resource. 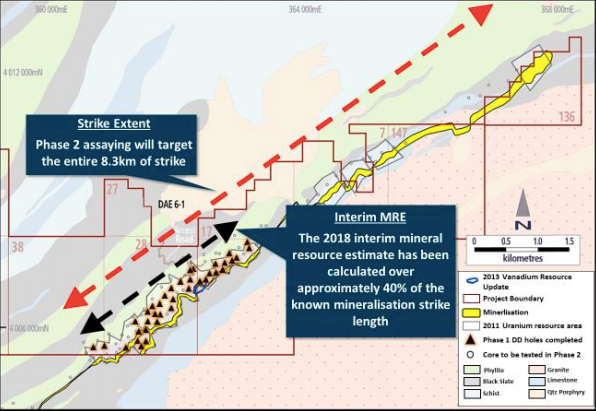 Phase 2 assaying is targeting the remaining 60 per cent of the deposit strike length and is expected to be completed imminently, resulting in a further Resource update.

Intriguingly, the Daejon shale hosted deposit is similar in nature to the neighbouring Chinese “stone coal” deposits, which display grades ranging from 0.13 per cent to 1 per cent vanadium.

However, POW remains a speculative play and there is much work to be done, so investors should seek professional financial advice if considering this stock for their portfolio.

Stone coal vanadium deposits represented approximately 47 per cent of the world’s vanadium production in 2017, and are the world’s primary source for the high purity vanadium electrolyte used in electricity storage applications.

Encouragingly, Chinese stone coal deposits are amenable to beneficiation processes, including selective flotation and magnetic separation methods, which are being successfully used to achieve an average 300 per cent upgrade.

Next steps include selective flotation and magnetic separation testwork, aiming to beneficiate the vanadium grade by a minimum per cent.

Moving forward, POW will complete of Phase 2 assaying, targeting the remaining 60 per cent of the known mineralisation strike. From there, the company is looking at an updated MRE over the entire Chubu shale horizon captured within its tenements.