Perth-based mining group, Prospect Resources (ASX:PSC), a company with three projects located in Zimbabwe has delineated high-grade lithium dioxide at its Arcadia project located near Harare in that country.

As a backdrop, the initial exploration target is up to 18 million tonnes at between 3% and 5% lithium dioxide. Its location in one of three well-known Zimbabwean lithium camps suggests its tenements are highly prospective and the fact that all drill holes in a maiden 48 hold drill program intercepted lithium bearing pegmatites augurs well for the future.

Today’s news that assay results from the first three drill holes returned a peak grade of 4.37% is positive from a number of perspectives. Firstly, all three holes identified the presence of lithium dioxide.

Furthermore, holes ACR003 and ACR002 returned grades of between 1.5% and 3% across relatively broad widths.

Management highlighted that the drilling to date had only covered approximately 10% of the exploration area. PSC’s ground position now covers more than 600 ha of mining licenses.

It is also worth noting that the drilled strike of the 14 stacked pegmatites now extends more than one kilometre south-west to north-east and approximately 350 metres down dip to the north-west. 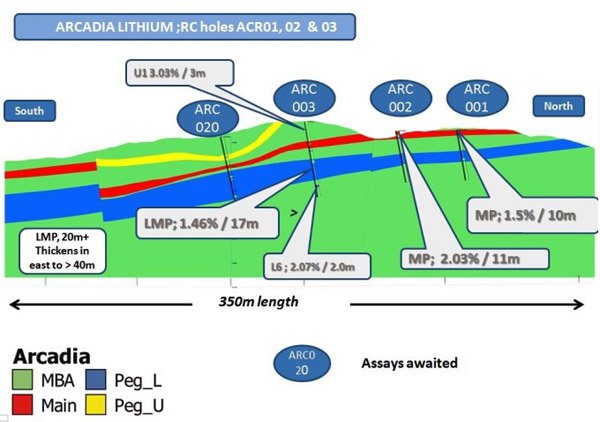 There are some potentially positive share price catalysts on the horizon with management targeting the first JORC reportable mineral resource to be generated before the end of October.

A factor to bear in mind with regard to PSC, however, is the sovereign risk associated with countries operating in African regions which can experience political instability and other events outside of management’s control. You should seek professional financial advice if considering this company for your portfolio.

The mine scoping study should be finished by the end of December with first ore production planned for June 30, 2017.

Negotiating offtake agreements will be an important milestone in terms of gaining buyer recognition of product quality, providing visibility of revenues and potentially placing the company on a solid footing in terms of raising capital to progress the project.

On this note, management said it is in offtake discussions with more than five Asian lithium carbonate and lithium hydroxide producers and it expects agreements to be completed prior to December 31.

While PSC’s shares opened slightly higher on Monday morning it could be argued that confirmation of offtake agreements will be the most significant share price driver given that the market already is aware of the quality of the resource and the fact that management has flagged production for the middle of 2017.

That said, upcoming drilling results will provide a lead as to the quantum of the mineral resource which will be important in terms of assessing the commercial viability when completing the scoping study.

Examining PSC’s historical share price performance, there may have been some profit-taking over the last few months given its shares increased approximately four-fold from 1.8 cents to 7.1 cents between June and July.

While the recent retracement could be deemed a buying opportunity it should be noted that past share price performance is no indication of future trading patterns and this should not form the basis of an investment decision.