Zinc of Ireland (ASX: ZMI) has released promising assay results following drilling at its Celtic Tiger prospect which highlights the western margin of the Allenwood Graben as a 4 kilometre long exploration target, with the prospect located approximately 1 kilometre west of the McGregor deposit.

Both the Celtic Tiger prospect and the McGregor deposit are part of ZMI’s 100% owned Kildare MVT zinc project located in Northern Ireland, a region hosting prominent zinc deposits which are currently being operated by multinational mining groups.

The Celtic Tiger drilling results are significant in that the McGregor JORC resource does not include this zone, which given outstanding grades including 2.85 metres grading 20.2% zinc could potentially lead to a substantial resource increase.

It should be noted here though that ZMI is an early stage play and investors should seek professional financial advice if considering this stock for their portfolio.

While Celtic Tiger lies to the west of the McGregor deposit, its close proximity would provide ZMI with the capacity to mine and process ore from both areas. The proximity of the Allenwood Graben can be seen in the following map. 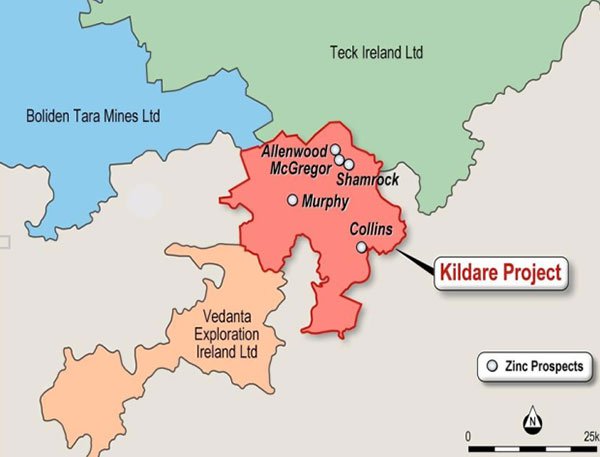 ZMI noted that there is the potential for shallow mineralisation to exist in this new area of exploration, a notable feature given that it could positively impact the project’s economic viability.

Another good read on behalf of management

ZMI’s management has consistently demonstrated its ability to conduct creative drilling campaigns. While the company has the benefit of substantial historical exploration data, it hasn’t solely relied on the results of previous drilling and sampling.

The company’s decision to drill below previous depths paid dividends in the 2016 campaign, resulting in the establishment of a much larger resource at McGregor. 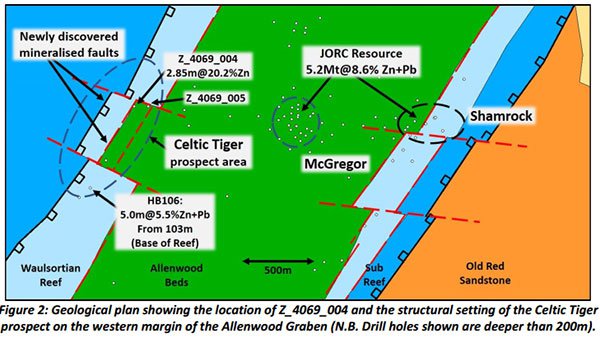 Similarly, the Celtic Tiger prospect was targeted following ZMI’s reinterpretation of the structural framework of the Kildare district and the recognition of the Allenwood Graben.

The model implies that there is a fault network running along the western margin of the Allenwood Beds and the Waulsortian Reef in this area (see below), making it a highly favourable setting for structurally controlled zinc mineralisation.

Commenting on these recent developments, ZMI’s managing Director Peter van der Borg said, “Achieving an intersection grading 20% zinc over a 3 metre thickness in a new area is highly encouraging in light of our rationale for targeting there, and we now have an exciting new prospect in close proximity to the McGregor resource offering considerable leverage to the upside.”

Van der Borg said that the company is in the process of planning and permitting the next round of drilling with a view to following up on the spectacular intercepts just announced, while at the same time examining from a strategic perspective how Celtic Tiger could potentially fit into the broader Kildare project.