MinRex Resources Limited (ASX:MRR), an ASX-listed small cap looking to advance exploration for gold and tin in WA and Tasmania, has updated the market regarding its latest exploration program at the Deflector Extended Gold Project.

These new assays have come from an infill field program of geological mapping and collection of 184 surface rock samples, which was conducted in November this year.

The project area (E59/1657) lies to the northeast of Doray Minerals’ (ASX:DRM) Deflector Mine, where copper-gold mineralisation occurs in shear zones in meta-basalt, as well as the Golden Stream open-cut, where gold was produced from shear-zone hosted quartz veins in meta-basalt.

MRR has been actively exploring the project area since 2011, utilising surface sampling and geological mapping to hone in on buried mineralised structures and favourable settings for mineralisation.

Around 85 per cent of the E59/1657 area is covered by sand, colluvium, scree and alluvium, with only about 15 per cent outcrop of mafic meta-basalts in the Cagacaroon Hills area, and other small areas of granite and dolerite.

These results have all indicated that a large sand, colluvium and scree covered area — immediately to the north of the outcropping Cagacaroon Hills meta-basalt — has consistently returned the most anomalous gold assay results.

The sand and colluvium covered area to the north of Cagacaroon Hills in E59/1657. Source: Minrex Resources

MRR has now collected a total of 534 surface rock, scree and float samples in the project area, along with soil samples and auger drill results, which have defined significant anomalous zones for further examination and sampling.

It should be noted that MRR is in its early stages here and investors should seek professional financial advice if considering this stock for their portfolio.

There have also been prior programs of RAB drilling, aircore drilling and soil sampling by earlier explorers of the area, with results supporting the definition of these anomalous zones. The full results from all 535 rock samples to date are shown below: 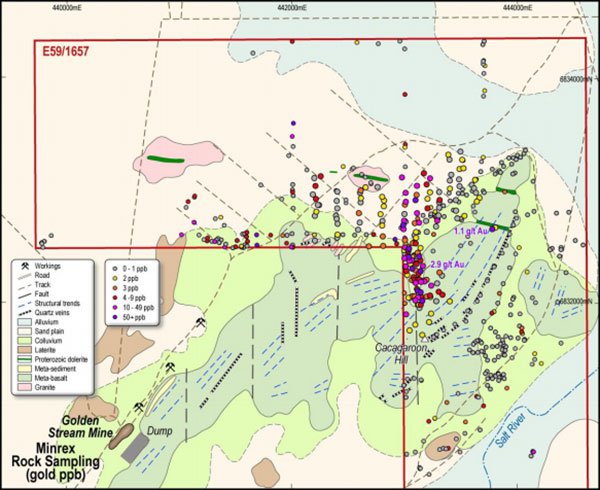 The best results are from an area now known as Corner Cree, where a number of anomalous surface assay values (up to 2.9 grams per tonne of gold) are clustered. It is a distinct scree-covered area adjacent to mafic meta-basalt and an interpreted fault zone, near the central corner of the lease.

Interestingly, the prevalence of higher gold values in rock and soil values in areas of mafic colluvium suggests that concealed mineralisation may lie below the blanket of scree surrounding the Cagacaroon Hills meta-basalt outcrop area, especially immediately to the north.

MRR anticipates that the next stage of work here will comprise a shallow, vertical aircore drilling program comprising lines of holes about 40 metres apart, somewhere within this preferred area. The company also believes that a small rig will be able to work in the area, using the existing grid lines and tracks without having to mechanically clear lines. A simple process of hand clearing, or vegetation avoidance, can likely be utilised to enable drill rig access — which would maintain the work as a low to moderate disturbance program.

The heritage survey process, including archaeological and ethnographic surveys over the proposed drilling areas, will commence in early 2018, as well as collection of further samples during the year with a view to pinpointing the most anomalous areas for subsequent drilling.

This work will concentrate on the defined anomalous zones, but will also include some further reconnaissance work elsewhere in the Deflector Extended Gold Project.