European base metals explorer Zinc of Ireland (ASX:ZMI) has confirmed that diamond drill hole Z_4069_008 had been completed as part of the ongoing Phase 3 program at its Kildare MVT Zinc Project in Ireland, subsequently producing some promising assay results.

As indicated below, ZMI has identified two previously untested target areas adjacent to the known mineralisation at McGregor that are considered favourable for expansion of the base of reef mineralisation. 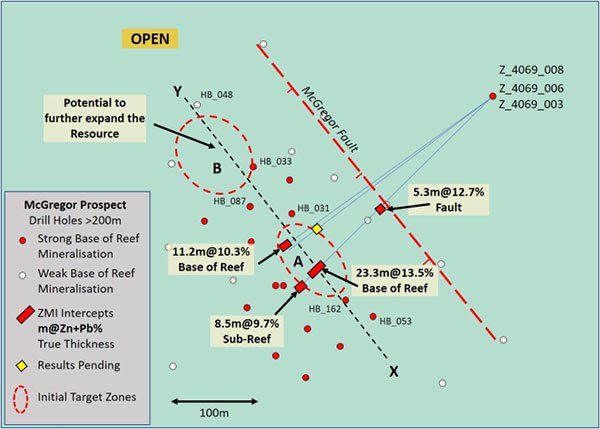 Assay results from Z_4069_008 featured thick, high-grade intercepts comprising a true thickness of 11.15 metres grading 10.3 per cent combined zinc and lead, confirming that massive sulphide mineralisation along the base of reef horizon extends for more than 100 metres along strike across the target area.

Drill-hole Z_4069_008 has also confirmed the presence of the mineralised McGregor Fault, which the company believes played a significant role in the formation of the McGregor mineralisation. Similar faults are observed in many of the great structurally controlled Irish Zinc deposits such as Lisheen.

Commenting on these developments, ZMI’s managing Director Peter van der Borgh said, “This hole was part of a successful program designed to extend mineralisation in Target Zone A at McGregor, and these impressive results have confirmed the potential to expand the resource in this area.”

As a consequence, the company is now planning to drill into Target Zone B, where it sees similar scope for resource expansion.

Aside from the McGregor prospect, ZMI has two rigs operating at the Celtic Tiger prospect following the discovery of several zones of high-grade mineralisation where the target geology is stepping up to shallower levels.

Highlighting the significance of the progress made with this prospect, van der Borgh said, “The drilling is telling us that Celtic Tiger has many of the right ingredients, and a base-of-reef discovery at these target depths would be a highly important development for the company.”