In addition, SHK will acquire rights to the significant body of intellectual property (IP) held by KIGAM which includes the results of numerous studies on processing of Daejon style Korean Ockcheon belt vanadium-bearing black shale mineralisation.

These studies were undertaken at both bench and pilot plant scale on mineralisation from tenements immediately to the south and along strike from the Daejon Project area.

The existing KIGAM pilot plant, which was part of these studies, holds the potential to become a significant asset to POW’s project.

Today’s announcement is a further endorsement of the strong relationship that has been forged between SHK and KIGAM following the landmark agreement to allow testing of 36,000 metres of Daejon Project drill core held by KIGAM.

It should be noted POW remains a speculative stock, so investors should seek professional financial advice if considering this stock for their portfolio.

The KIGAM IP and results from studies undertaken by POW in Australia will be used to help guide the vanadium processing optimisation program.

The project aims to optimise the processing flowsheet for the extraction of vanadium from black shale and its purification into battery grade V2O5.

Under the agreement, KIGAM and POW have agreed to share all historical metallurgical and processing testing data in an effort to optimise the processing approach for recovery of vanadium and the production of a high purity V2O5 end product.

The project also has the important aim of reviewing the current KIGAM pilot plant design with a view to updating and optimising it for vanadium extraction.

The pilot plant is housed within KIGAM’s Daejon City facility and was commissioned in 2012 to process vanadium/uranium bearing mineralisation from within the greater Daejon area (Ockcheon) black shale belt.

KIGAM conducted a number of tests between 2012 and 2015 and registered three patents for the extraction and production of V2O5 and U3O8. Work ceased in 2015 due to continued depressed U3O8 market pricing. 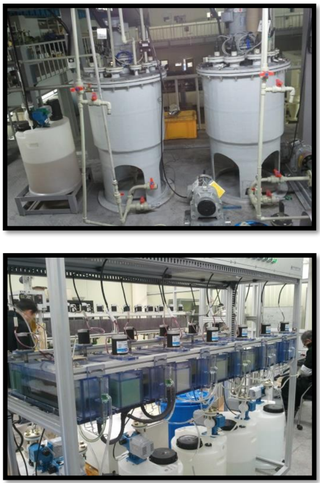