The Finniss Project is situated near Darwin in the Northern Territory. Notably, CXO was the first ASX-listed junior to highlight the lithium potential of the pegmatites in the NT in 2016.

Recent diamond core drilling has confirmed that extensions of the BP33 spodumene pegmatite are open south and south-west toward pegmatites 200 to 300 metres along strike at the BP32 and BP32W prospects.

If these pegmatites are connected, then there is substantial strike length of around 500 metres to the BP33/BP32/BP32W pegmatite system. 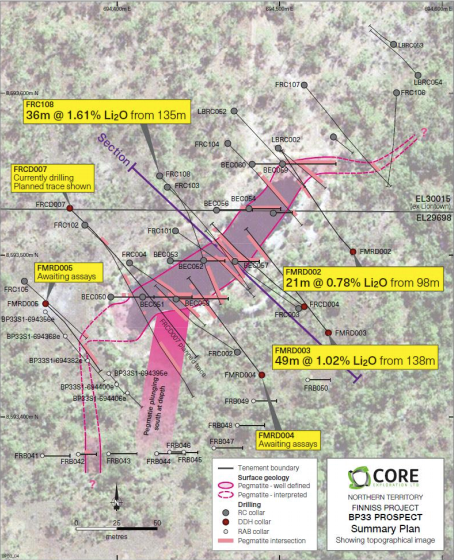 Drilling at BP33 has aimed to establish a maiden Resource estimate, building on CXO’s lithium resource inventory at Finniss.

This first phase of the resource-focused diamond drilling at BP33 is now completed, with further assay results expected later this month and into March.

Resource upgrade drilling is also continuing at the Grants deposit situated five kilometres from BP33, for which a Pre-Feasibility Study is currently underway.

CXO is planning to drill at both the BP32 and BP32W prospects as soon as the 2018 dry season commences, aiming to test the continuity and grade of these pegmatites adjacent and along strike from the high-grade BP33.