Prospect Resources (ASX:PSC) today announced that results collected from 106 samples at five trenches excavated at its Chiliogali Graphite Prospect in Tanzania, were consistent with results taken from the first phase of assaying that was undertaken in 2014 on eight other trenches.

Tanzania seems to be a graphitic hot spot at the moment, and it seems Prospect Resources is following suit.

The results for all 458 channel chip samples collected (Phase 1 and 2) from thirteen trenches produced are as follows:

Analysis of the results was conducted by PGC Group Consulting, who completed the interpretation of the conductivity data collected during the 2014 EM34 survey.

The analysis concluded that 75 conductive anomalies have been identified over 9km of strike length. There is a high probability that the majority of these are caused by graphitic schists.

The 75 anomalies generated by the re-interpretation of the data are considered significant.

Prospect Resources will undertake an enlarged trenching programme targeting the conductive anomalies and are confident of finding more thick zones of graphitic mineralisation.

Though only limited metallurgical test work has been done to date, it seems that concentrates of >98% carbon are possible.

Prospect Resources is exploring in a region of Tanzania recognised for its potential to be a significant global graphite producer. 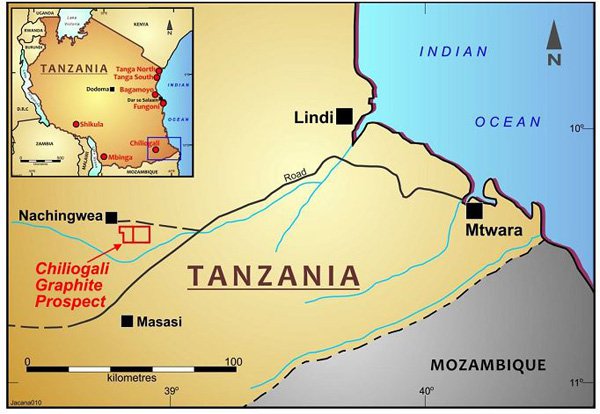 Location of the Chiliogali Project in South Eastern Tanzania.

The grades and quality of graphite identified at the Chiliogali Graphite Prospect mean that Prospect Resources has the potential to be a significant player in the graphite production industry.

Prospect Resources is now awaiting results of initial metallurgical test work at SGS Johannesburg and will assay the Phase 2 samples for gold and multi-element. The Company also plans to re-assess the planned trenching programme in the light of the geophysical work. This will require the excavation of approximately 20 further trenches. Furthermore they will initiate short hole RC drilling programme and an infill and twin diamond drilling programme.