White Rock Minerals (ASX:WRM) last week released the key results of its Pre-Feasibility Study (PFS) into the development of the first stage of its Mt Carrington gold and silver project in NSW.

The study confirms not only the financial viability but the technical viability of the initial project development at Mt Carrington, resulting in a strong rationale for advancing the project to the next stages including a Definitive Feasibility Study (DFS). Findings indicate the project will first focus on gold prospects, and then silver down the track. The PFS also declared a Maiden Ore Reserve of 3.47 million tonnes at 1.4g/t gold for 159,000 ounces gold.

The study produced several key changes to the company’s understanding of its Mt Carrington project when compared with the 2016 Scoping Study, including an extension of the mine life from an initial three years to four and a half years; a production rate increase of 25 per cent; a 30 per cent increase in gold production to 35,000 per annum; the total gold produced increased by 59 per cent to 148,000 ounces gold over the initial Gold First Stage.

The PFS findings provide a strong rationale towards advancing Mt Carrington, from both technical and financial vantage points, with the potential to generate in excess of A$36 million undiscounted cash flow over the initial four and a half years’ Gold First mine plan, including a strong Internal Rate of Return (IRR) of 34 per cent.

The total forecast capex of the project was declared at A$35.7 million including a A$4 million contingency, with the study estimating an average all-in sustaining cost (AISC) of A$1,236 per ounce over the initial life of mine.

The development plan evaluated in the PFS relates to the first three gold-only production open pits and a conventional whole-of-ore leach process plant with an annual throughput of 1 million tonnes.

The PFS also indicates the significant potential upside in further silver production as well as ongoing gold and silver exploration.

However, any numbers here would be speculative at this stage so investors should seek professional financial advice if considering this stock for their portfolio.

The below table shows the key physicals outcomes of the PFS: 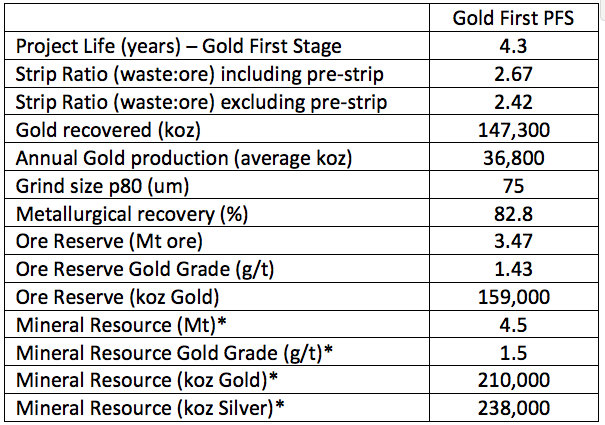 This table shows the key financial outcomes of the PFS:

As WRM’s board has now approved the Stage One PFS and determined the best ‘go-forward’ case, the Definitive Feasibility Study (DFS) can now commence (subject to funding).

As mentioned earlier, Stage One of the mine plan designates Mt Carrington’s gold prospects as top priority. The project’s silver-dominant Resources — containing approximately 8.3 million ounces in the Indicated category — is the subject of further mineralogy studies, metallurgical test work and concentrate sales discussions.

The mining of the silver-dominant Resources will constitute Stage Two of the project, which will provide the opportunity to potentially increase the scale and overall life of mine, at minimised costs. The company is currently undertaking further study into the potential of Stage Two at Mt Carrington.

The technical analysis undertaken as part of the PFS was completed with the assumption of a US$1,275/ounce gold price and a foreign exchange rate of AUD:USD 0.75.

Importantly, a peer group comparison pits WRM’s gold-silver project within a middle range of All In Sustaining Costs (AISC), as indicated in the graph below. 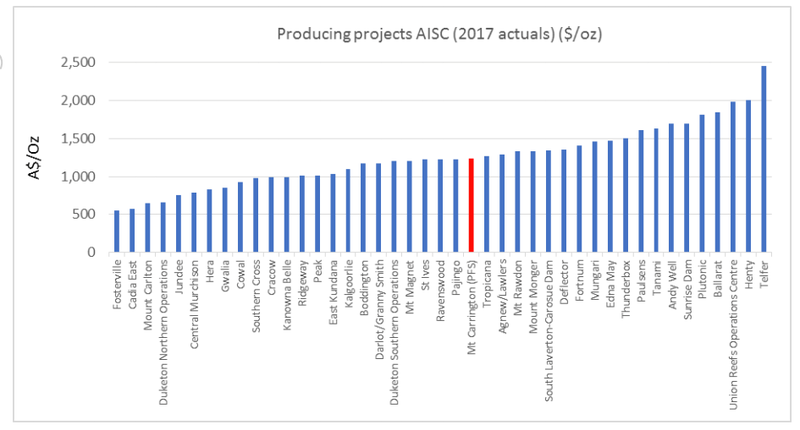 In its announcement, WRM stated that it views the Mt Carrington Gold First Stage One as a solid and ‘deliverable’ project.

Managing Director and CEO Matt Gill said: “The Board is delighted to approve the Mt Carrington PFS and also the commencement of the Definitive Feasibility Study. Now that the PFS results are in we can see a modest capex and opex way to deliver real value from the project for our shareholders.

“This is likely to be the first of several stages to fully explore and exploit the valuable resources that we have at Mt Carrington. The initial 4 1⁄2 year gold first stage will deliver over A$36 million in free cash flow and provides our shareholders with a 22-month payback and solid return on investment. Subsequent stages of the project will require additional study and investment and are expected to yield similar positive results.

“The Mt Carrington resource base also includes over 8 million ounces of silver in the Indicated category and this resource is expected to be the basis of Stage Two of the project. WRM will ensure that every opportunity to improve project scale and return on investment will continue to be examined and pursued.

“We thank all our stakeholders especially all of our local communities and major shareholders for working so closely with us to see the strong possibilities in this project for all.”