A total of 488.9m of diamond drilling has been completed to date across the five drillholes, with visually estimated graphite intersections as follows:

The intersections will be logged for total graphitic carbon (TGC) analysis and flake distribution prior to further drill work, which will define a maiden Mineral Resource. 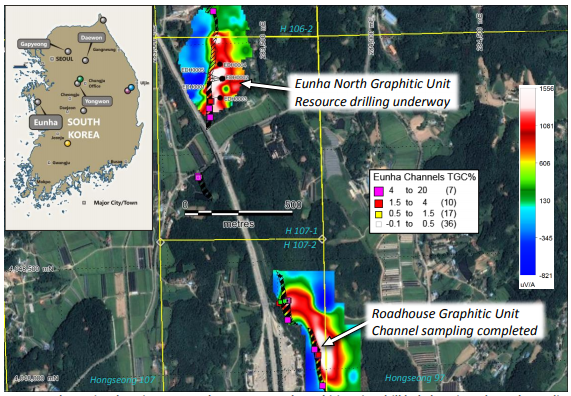 In addition to resource drilling at Eunha, a >5kg, high-grade concentrate sample (>95% TGC) is close to generation.

It should be noted that this remains a speculative stock, despite the strength of the current market price and investors should take all publicly available information into account if considering this stock for their portfolio.

The company has noted that foreign investment incentives (leasing and power discounts) are on the table if it were to construct a spherical graphite production facility at a key industrial site at Dangjin Port in Chungham Province.

In addition to the above drill work, channel sampling has been completed across the Roadhouse graphite unit, on an average 40m spaced sections. A total of 81 samples will be processed at Nagrom laboratories in Perth, with results to be reported prior to drill target selection.

PSM Managing Director Jon Dugdale commented on the update, “The initial intersections of thick and potentially high-grade graphite at Eunha North are a key first step towards defining a mineral resource for potential development and concentrate production.

“The ultimate objective, however, is to take the graphite processing a step further – to produce high-purity spherical graphite on the doorstep of the Lithium-Ion battery industry in South Korea.”

In addition to the above drill work, channel sampling has been completed across the Roadhouse graphite unit, on an average 40m spaced sections. A total of 81 samples will be processed at Nagrom laboratories in Perth, with results to be reported prior to drill target selection.

Peninsula Mines is an Australian listed exploration and development company focused on mineral discovery and production in South Korea.

The company has operated in the country for over five years, and now features an established network of key contacts.

PSM has identified a key opportunity to produce spherical graphite in South Korea, with the intent to directly supply lithium-ion battery manufacturers and other graphite end-users within the country.