Diversified South Korean mining group, Peninsula Mines (ASX: PSM) has been granted three exploration and mining tenements across an area of 828 hectares by the Korean government.

The three tenements relate to the group’s Chilbo high grade zinc target at the Ubeong zinc project in South Korea. There is one further tenement application pending (Hyeondong), which if awarded would fully encompass all of the Chilbo target area.

The map below illustrates the areas that have been awarded, underlining the fact that they cover the majority of the high grade Chilbo zinc target, while also demonstrating the section in the bottom left quadrant that is still to be granted. 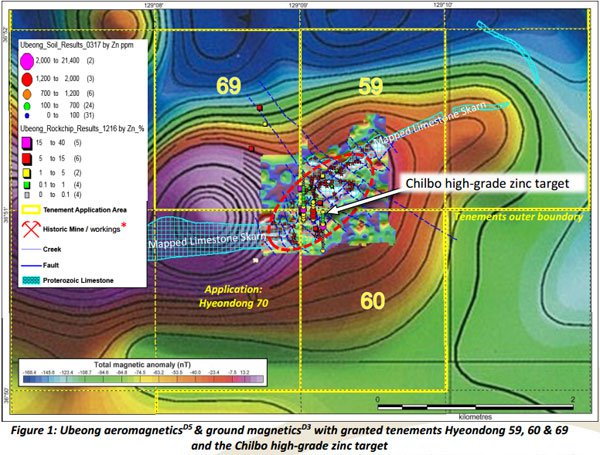 Granting of the mining tenements provides PSM with a period of one year in which to submit a prospecting plan, which then gives the company an initial three-year prospecting period that may be extended subject to certain conditions for a further three years.

This is indeed an early stage exploration play, so investors should seek professional financial advice if considering this stock for their portfolio.

The South Korean government has taken a ‘use it or lose it’ approach to mining tenements, which has worked in PSM’s favour as potentially prospective sites that were not being developed became available for acquisition.

This has enabled PSM to accumulate a portfolio of graphite, lithium, gold-silver and zinc-silver-polymetallic projects in South Korea that all offer significant exploration potential.

Management’s strategy has been to focus on mineral commodities which have a positive price outlook, and in particular offer potential for offtake or strategic partnerships within South Korea.

The Ubeong zinc project is in keeping with targeting commodities that are in favour, as it was the best performing base metal in 2016, and has started strongly in 2017 with the zinc price up circa 10% in the first few months.

Early exploration work at the Ubeong project has yielded positive results with high grade channel sampling returns including 2 metres at 29% zinc, 0.4 metres at 39.7% zinc and 1 metre at 23.1% zinc.

Commenting on the award of the three tenements and the group’s strategy going forward, PSM’s Managing Director Jon Dugdale said, “We are extremely pleased to have these key exploration and mining tenements granted over the Chilbo high grade zinc target, as this now allows us to fast track surface geochemistry and IP (induced polarisation) geophysics to define drilling targets for testing of this highly prospective zone.”