The Exploration Target estimate is summarised in Table 1 below and has been determined using a combination of exploration data, that includes, mapping and surface channel sampling D1, D2, D14, geophysical modelling of electromagnetics (EM) data and initial drilling at Eunha North, that verified the correlation between channel sampling and EM modelling.

Of course PSM is in the early stages of this ambition, so investors should seek professional financial advice for further information if considering this stock for their portfolio.

The next stage of the program is to drill define the graphitic units at the flagship Gapyeong Graphite Project, which represents 85% of the overall Exploration Target estimate.

Drilling access agreements have now been signed with two key private landholders at Gapyeong and, subject to the approval the local Gapyeong-gun Council, this will allow initial drilling to target a core 240m strike length near the centre of the 1,000m mapped strike extent of the targeted Gapyeong graphitic units.

This central zone corresponds with the most intense EM anomalies at Gapyeong, from where the thick and high-grade channel sampling results were recently released. Modelling of the EM conductors and mapping of the graphitic units at Gapyeong indicates the two parallel, high-grade, graphitic units have been folded into a synformal structure.

PSM Managing Director, Jon Dugdale said: “The thickness, high-grade, and steeply dipping geometry of the Gapyeong graphitic units indicates they may be amenable to both open pit and subsequent underground mining, and this potentially under-pins our business model of supplying high quality graphite to the South Korean lithium-ion battery industry.”

The Exploration Target has been extended to the projected depth of the synformal fold structure, up to 350m vertical depth. 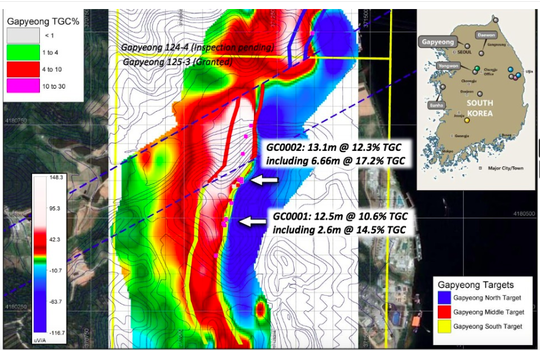 The recent results of the Eunha Graphite Project drilling and channel sampling programs will be further evaluated prior to any decision being made to complete any additional drilling at the Eunha North and/or Eunha Roadhouse Prospects.

Further drilling at Eunha is considered a lower priority than drilling of the higher-grade Gapyeong and Yongwon Projects. MUS has an agreement in place with a key landholder at Eunha North and could resume drilling activities at any stage.

Drilling of the Yongwon Project graphitic unit has been planned but is on hold pending resolution of forest access negotiations with the Chungju City Council. Therefore, timing of approval for drilling access to the Yongwon Project remains uncertain at this stage.

Should an access agreement be negotiated, an up to 23-hole diamond drill program has been designed that would deliver drilling across five 80m spaced sections with 40m spaced drill holes on each section. Metallurgical testing has achieved >95% TGC concentrate grade for all of the projects included in the Exploration Target estimate.

The company will now initiate generation of a second >5kg flake-graphite concentrate sample, from the Gapyeong Project, in addition to the concentrate sample from Eunha. This sample will then be dispatched to Germany in order to carry out down-stream processing testing targeting production of 99.95% purity, uncoated, spherical-graphite to meet the specifications required for lithium-ion battery production as provided by a key anode manufacturer in South Korea.

Sufficient information has been generated to estimate the Exploration Targets for the Gapyeong, Yongwon and Eunha North graphitic units as shown in previous releases listed below. The Daewon graphite target has been insufficiently channel sampled to generate an Exploration Target estimate at this stage.