There is strong prospectivity with identification of several new highly promising targets; two of the new conductors are located immediately north and south of nickel mineralisation intersected in previous drilling, whilst three conductors are associated with a previously untested ultramafic sequence defining the western margin of the ROE2 sequence.

Drilling began at the Talc Lake prospect and will move onto other targets.

The Company’s targets are delineated across a significant 40km long strike zone, meaning there is more than enough room for several major nickel discoveries.

The targets will be tested as part of a drilling program of up to 5000m of Reverse Circulation (RC) and diamond drilling.

The Roe 2 prospect is located at the northern end of the Roe Hills project, approximately 30km north of Talc Lake and 5km south of the Roe 1 prospect. It comprises 3-5 separate prospective ultramafic cycles, all of which are hidden beneath transported cover which has rendered standard historical exploration methodologies largely ineffective.

See the table below for details. 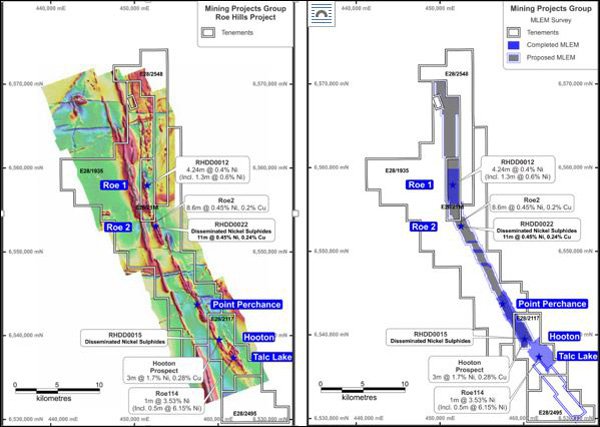 As such it has been largely under explored, which opens the door for MPJ.

Expectations are high with MPJ believing that the targets have all the makings of a potential new nickel discovery, right next door to the world-class Kambalda nickel region which contains all the big nickel players’ infrastructure including smelters and refineries.

The team is working closely and drawing on their combined decades of experience, to ensure MPJ moves efficiently towards unveiling the next commercial nickel discovery in Western Australia.