Navarre Minerals has early success at the Irvine prospect

As well as confirming the presence of high grade gold in assays, management is also of the view that the geological features identified in the early stages of the drilling campaign are indicative of Stawell style gold mineralisation.

This is important given that the company is exploring an area in relatively close proximity to the 4 million ounce Magdala gold mine, which is producing gold from a deposit that has been mined to depths in excess of 1600 metres below surface.

The Irvine prospect which is located 15 kilometres south of Stawell’s Magdala gold mine was identified in 2015. The prospect is situated in the northern end of the Ararat goldfield which is estimated to have produced approximately 1 million ounces of gold, mainly from alluvial and deep lead production between 1850 and 1925. 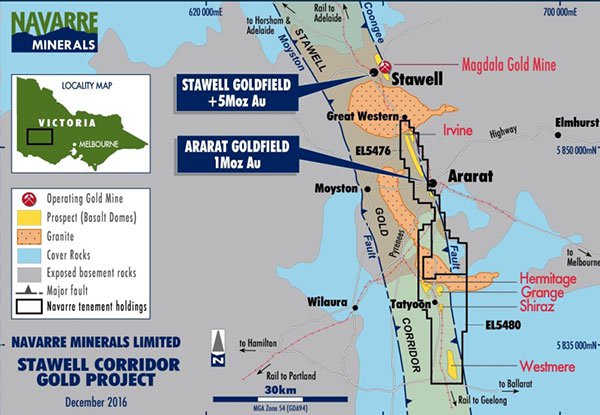 Consequently, it wasn’t surprising to see robust grades identified both near surface and at depth.

However, investors should note that NML is an early stage exploration company and these results should not form the basis for an investment decision. Those considering this stock should seek independent financial advice.

High-grade zones open in all directions

Management said the lower intercept is interpreted to be Stawell style gold mineralisation where gold is associated with quartz veining and aresenopyrite located adjacent to the margins of Cambrian basalt.

In response to these results, NML’s Managing Director, Geoff McDermott said, “These early assay results confirm the presence of shallow primary gold mineralisation of the Stawell style at Irvine and they represent a new mineralised zone unrecognised by previous explorers, providing early confidence for further potential gold discoveries as the drilling program progresses along the basalt margins”.

McDermott also noted that the nature of the gold mineralisation seen so far appears typical of the style currently being mined in Stawell by NML’s largest shareholder, Newmarket Gold Inc.

Importantly, new zones that have been drill tested remain open in all directions.