The Caula graphite Resource is subdivided into two zones:

Metallurgical testwork confirms exceptional quality graphite with more than 63 per cent of cumulative proportion in large to super jumbo flakes sizes (>180μm) and excellent concentrate grades of more than 97 per cent TGC.

The Caula graphite and vanadium project sits along strike from Syrah Resources’ (ASX:SYR) world-class Balama graphite project, which is projected to supply 40 per cent of the flake graphite market by 2020. There is also substantial scope here for further Resource growth through exploration.

A scoping study on Caula is set to be completed in the third quarter.

Following the merger of its Montepuez ruby project with Fura Gems (TSX:FURA), MUS is in an excellent position to emerge as a leading vanadium and graphite company.

Mustang Managing Director, Dr. Bernard Olivier, said: “This is an exceptional result. Caula’s Graphite Mineral Resource has not only increased over 300% but the entire resource is now in the Measured category.”

“The combination of the upgraded Graphite Mineral Resource and our recently announced maiden Vanadium Mineral Resource now paves the way for the fast-tracked development of the Caula project into production,” Olivier added.

Caula sits within a world-class graphite province, and there is also significant potential to expand this graphite Resource estimate further through ongoing exploration and drilling.

In the immediate vicinity of the Caula discovery, graphite mineralisation has now been defined over a 540 metre strike length. This mineralisation is up to 230 metres wide (estimated true thickness) and the depth is completely open-ended at the limit of the current drilling.

A new program of diamond and reverse circulation drilling has been planned to test for both up-dip and down-dip extensions to the Caula deposit in this area.

In addition to the possibility for further graphite and vanadium mineralisation immediately adjacent to the Caula discovery, there is also very strong potential to define high-grade graphite mineralisation over the much larger project area.

MUS plans to systematically to drill test the large-scale TEM target through progressive step out drilling from the Caula discovery. This drilling has now kicked off.

Locations of drill holes and the plan view of mineralisation at Caula: 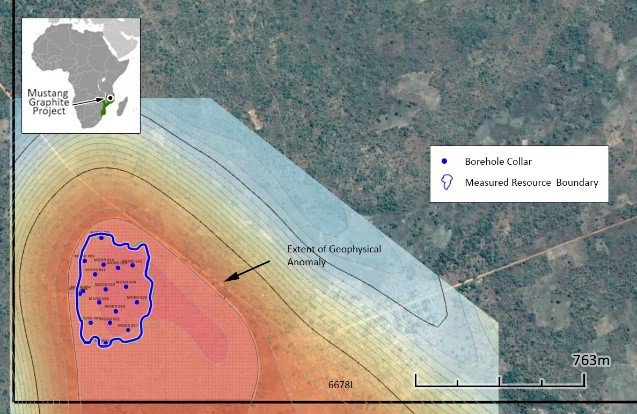 MUS said it is highly encouraged by the results received to date from its updated graphite Resource estimate and the Caula deposit as a whole.

Following this morning’s release, MUS is on an ascendant trajectory, currently up 15.8 per cent at 2.2 cents.