Mustang Resources (ASX:MUS) has recovered its first rubies from its Montepuez ruby project in Mozambique – a good sign heading into full bulk sampling in Q3.

The aspiring ruby miner told its shareholders today that it had recovered 10 rubies for a total of 2.61 carats as part of an initial trenching program at the project.

The trenching is taking place at the project in order to help firm up targets for a bulk sampling program in the third quarter of this year.

It is hoped the bulk sampling will bring up rubies which will be able to be sold to the market – ahead of full project development. 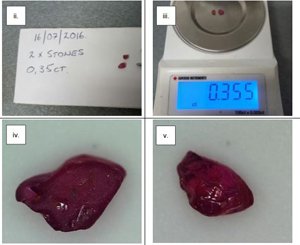 A sample of the rubies brought up by MUS

The appearance of small rubies in gravel at this stage though is thought to be a positive indicator, with MUS managing director Christiaan Jordaan saying the results were “very encouraging” at this early stage.

To date 25 samples have been taken as part of the initial trenching program – focusing on two types of gravel.

The first type of gravel did not yield any rubies, but the second lot of gravel, which was sitting on a grey clay bedrock yielded the 10 rubies – providing the company a clue on where the best chance of bringing up rubies may be.

MUS warned, however, that more mapping and pitting would be needed to firm up this hypothesis and to find the lateral extent of the ruby-bearing gravels.

Investors should note that this is still an early-stage play and full development is not guaranteed — investors should seek professional advice before deciding whether or not to invest.

MUS’s Montepuez Ruby Project is situated next door to Gemfields PLC (GEM:LSE) who’s ruby deposit is one of the largest in the world.

Gemfields realised a total of US$150.8 million in 5 auctions for 5.98 million carats of the 18.8m carats recovered during their bulk sampling phase (2012 – 2015) over which period its market capitalisation has grown to over A$450m. 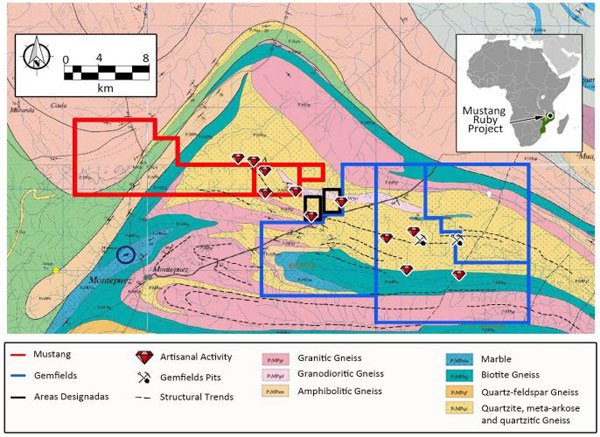 MUS is well positioned to piggy back on the success of Gemfields and bring any finds to market at a rapid pace by following the Gemfields playbook.