FinFeed presents this information for the use of readers in their decision to engage with this product. Please be aware that this is a very high-risk product. We stress that this article should only be used as one part of this decision-making process. You need to fully inform yourself of all factors and information relating to this product before engaging with it.

These conductor zones range from shallow depths below surface, of less than 50m, to deeper targets, of more than 250m, and up to four kilometres in strike length, located across its Kalahari Copper Belt Ghanzi West GWD1 prospect. The airborne magnetic and EM survey (AEM) covered an area of 1,091.7 square kilometres of the current 7,891 square kilometres of KMT’s 100% owned prospecting licences.

The D’Kar formation is known to host most of the mineralisation including the substantial and regionally proximate Zone 5 (Cupric Canyon Capital) and T3 copper-silver (Mod Resources Limited) projects.

In light of the survey, KMT has reassessed its portfolio of prospects and assigned the identified GWD1 AEM targets as its first priority. This target can be seen on the regional licence map below: 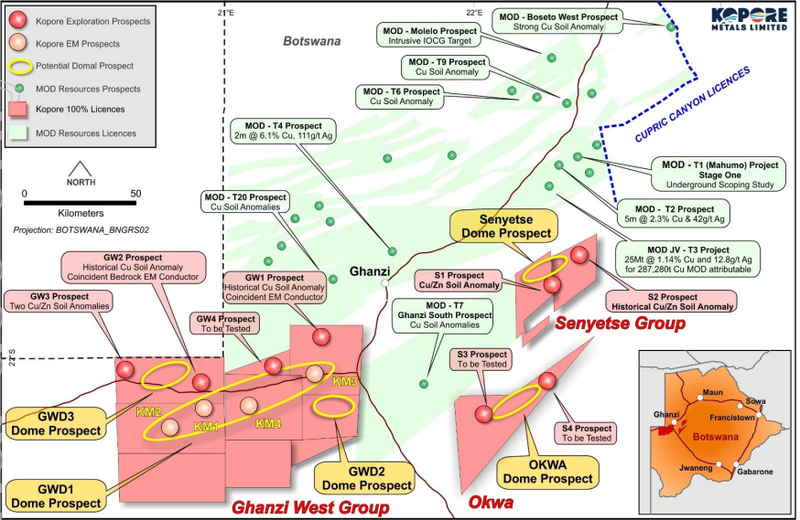 The company will conduct detailed ground geophysical programmes over each of its identified EM prospects as it investigates the potential for a MOD Resources Limited T3 copper-silver project style geometry. This ground geophysical and soil sampling will commence on these targets as soon as practical.

KMT continues to review the survey results and integrate the results with its additional planned ground reconnaissance programmes and drilling. The company has designed detailed ground EM survey programmes to follow up selected prospects to help refine the targeting process and establish a better understanding of potential geometry and will subsequently be used for exploration drill targeting.

It has also commenced preparation of the Environmental Management Plan (EMP) over the EM target areas for submission to the Botswana Department of Environmental Affairs. In preparation for detailed exploration drilling programmes, KMT will conduct detailed exploration programmes using non-invasive techniques, such as ground geophysics, concurrently with the EMP submission and approval process.

KMT will evaluate the potential for further AEM programs over recently identified prospects to refocus its planned exploration drilling campaign, which subject to government approvals is expected to commence in the second quarter of 2018. KMT’s recent geophysical programme has efficiently identified multiple potential copper prospects across its substantial landholding, which the company is looking forward to exploring over the coming months.

Managing Director, Grant Ferguson said, “We are extremely pleased that our maiden airborne geophysical survey has defined four quality initial primary targets that form part of a highly prospective, interpreted large domal area, as well as identifying a number of other regional targets for follow up.

We have made significant progress on our exploration programme since acquiring our tenements in the Kalahari Copper Belt, Botswana in November 2017 with the identification of multiple new soil anomaly prospect areas, bedrock conductor zones coincident to existing soil anomalies and at its Priority 1 GWD1 prospect, the identification of favourable EM bedrock conductor zones, hanging wall D’Kar Formation and other interpreted structures consistent with other copper-silver projects elsewhere in the Kalahari Copper Belt.”

“In addition to this recent airborne survey, an airborne regional magnetic reprocessing and ground reconnaissance program are assisting recent geological re-interpretations and demonstrating the increased potential prospectivity of this essentially unexplored section of the Kalahari Copper Belt. The timing of the GWD1 AEM results allows the Company to initiate planned targeted field exploration in late February/early March 2018, when the current wet season is expected to reach its end.”