Mining Projects Group (ASX:MPJ) hit mineralisation with the first hole on its current drilling campaign, and now it may have unlocked an even larger prize.

The ASX-listed nickel hunter told its shareholders today that it had identified a strong off-hole conductor situated below and down-dip from its first hole.

The conductor was identified using a down-hole electromagnetic geophysical survey of the recently completed exploration hole.

That hole was completed down to 395.2m downhole, and spot readings had found mineralisation of up to 3%.

It hit multiple narrow intervals of nickel-bearing sulphides between 190m and 260m, within the range identified on modelled down hole electromagnetic studies.

However, with a new conductor zone found, MPJ said it would now drill the new target within the next week.

MPJ is testing the Lake Talc prospect as part of its Roe Hills project near Kalgoorlie in Western Australia. 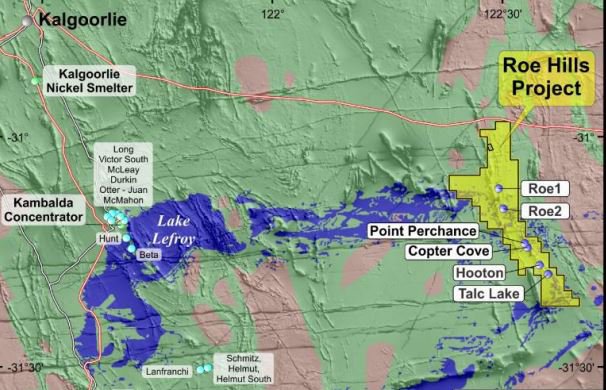 The location of MPJ’s Roe Hills project in WA

It is testing a possible 40km mineralisation extension at Roe Hills, with 5000m of drilling previously planned before the end of the year.

The assays from the first hole of the exploration campaign have not been returned as yet.