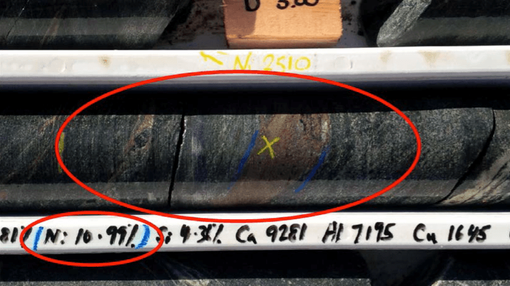 The hole intersected a 3cm wide pyrrhotite-pentlandite sulphide vein at a depth of 215.3 metres downhole, which returned nickel results grading between 10% and 12.6% nickel in addition to a chalcopyrite halo grading up to 2.75% copper.

The nature of this narrow high grade nickel vein which is surrounded by the high grade copper is indicative of structurally remobilised sulphides from a nearby primary nickel source.

The intersection occurs within a sequence of komatiitic ultramafic flows and sedimentary units which mark the edges of the lava channel system.

The sulphide vein is hosted towards the top of a 20m thick orthocumulate komatiite lava flow which again supports the remobilised nature of the mineralisation.

During the geological history of these rocks they were exposed to extreme pressure and heat resulting in sulphide mineralisation being squeezed from their source location.

Primary nickel sulphides are typically deposited towards the centre and base of the thicker komatiitic ultramafic lava channels or as thinner hanging-wall mineralisation at the base of the thin-flow fingers.

Sulphides are subsequently remobilised and high-graded into nearby fractures developed in the rocks during the deformation process; the remobilised sulphide at the edge of the lava channel is assumed to have come from nickel mineralisation located toward the centre of the channel.

It’s interpreted to be sourced from massive sulphide, as opposed to disseminated nickel sulphides, due to the high grade nature of the vein.

The next two diamond drill holes are designed to stratigraphically define the centre of the komatiite lava channel and locate the source of the nickel sulphide mineralisation.

Down-Hole Electromagnetics will be completed by Newexco to potentially locate and define the source of the mineralisation in conjunction with geochemical and geological modelling.

The drill core is currently being cut in the field and will be sent to the laboratory for multi-element analysis.

The Roe Hills Project is located within a 50km length of prospective nickel bearing komatiitic greenstone, around 110 kilometres east of Kalgoorlie.

MPJ holds 100% of five tenements covering a continuous strike of 40km of ultramafic rocks and 360 km2 of prospective greenstone terrain, as well as one new application.

Historic exploration activity at Roe Hills started in 1965 for both nickel sulphides and gold. Exploration was initially completed by various smaller companies until major campaigns were completed by WMC Resources, Vale-Inco and Oroya Mining between 1995 and 2009.

Previous drilling for nickel sulphide mineralisation at Roe Hills has defined three prospective ultramafic flows, analogous in style to that seen at the Kambalda, Cosmos and Black Swan deposits.

Results from historic drilling include 0.5m at 6.15% nickel from 155m at the Talc Lake prospect.

The new nickel sulphide intersection, along with the historic intersections and the recent geochemical study confirm the prospectivity and potential for the Roe Hills Project to contain significant nickel sulphide accumulations within the fertile ultramafic lava channels.