Shares in Mozambi Resources (ASX:MOZ) skyrocketed by over 23% in yesterday’s trade on the back of news that it had effectively quadrupled the strike length at its flagship Chiwata graphite prospect in Tanzania.

MOZ told the ASX yesterday that geological mapping informed by an ongoing pitting program had firmed up the strike length at the project to 4km, up from 1km.

Managing director Alan Armstrong said the best part of the upgrade was that the prospect remained open, hinting at further extensions to come.

“The Chiwata Prospect is starting to materialise and initial exploration indicate(s) a significant increase in potential,” he said.

“To have increased the strike length to over 4km and see that it remains open is extremely exciting.”

News of the strike length extension comes shortly before assay results from rock chips – gathered as part of the aforementioned pitting program – are expected to come in.

The first results are expected as soon as this week.

MOZ has previously brought up rock chip samples with confirmed jumbo flake graphite with a total graphitic carbon content of 7.9%.

An electromagnetic survey covering the new strike area is expected to start in the middle of this month.

MOZ is currently in the middle of tapping a driller to start a 2000m to 3000m drilling program to begin in October. This program should give MOZ enough data to declare a JORC-compliant resource estimate at the project.

About the Chiwata project

The Chiwata project lies in the south east of Tanzania, which is quickly becoming a graphite hotspot in Africa. 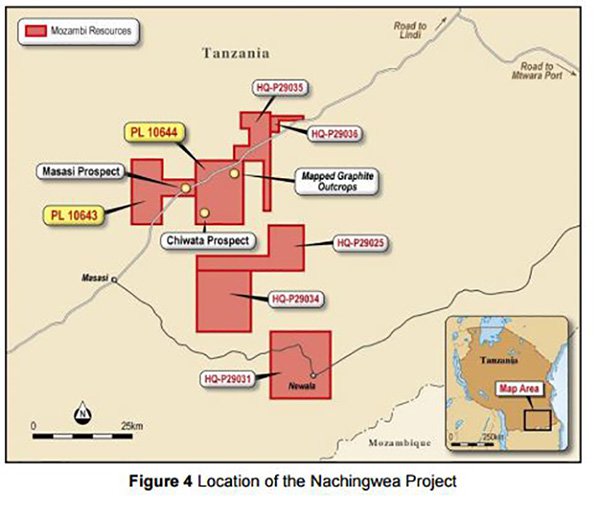