Mozambi Resources (ASX:MOZ) has identified large surface zones of graphite schist, up to 180m wide and over a strike length of 1,000m, at its new Nachingwea Graphite Project in Tanzania.

Nachingwea covers 18 highly prospective graphite tenements in South-Eastern Tanzania, and in May 2015 MOZ signed a binding Terms Sheet granting the company the option to acquire any and all of these tenements. Three of these tenements, which feature targets initially identified in recent recognisance mapping, have progressed with an offer to grant from the Tanzanian Ministry of Energy & Minerals.

MOZ aims to develop these projects spanning two African countries simultaneously, then seek to link their exploration and production programmes to create a dominant source of graphite in East Africa.

As part of its evaluation of Nachingwea, MOZ has begun field exploration of the area and is concentrating on two tenements initially – HQP-29033 and HQP-29027. 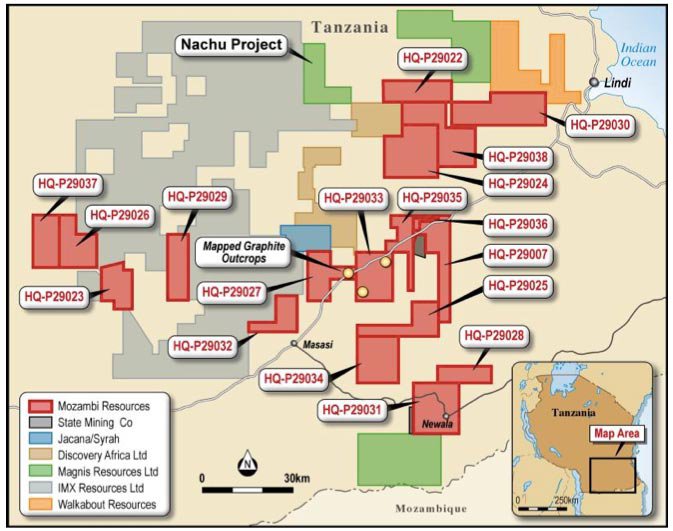 Teams in the field have identified multiple outcrops of surface graphite schist rock with some zones spanning up to 180m wide.

A strike length of 1,000m has now been identified, though trenching and rock chip sampling will be required to determine the grade of the rocks and identify high-grade graphite zones. Multiple areas of sub-cropping graphite schist have also been identified.

Visual estimates by ground teams put the graphite schists identified so far in the 5-10% graphitic carbon range, though follow up testing will be needed.

These results are encouraging for MOZ because the Nachingwea Project area lies within the Mozambique Mobile Belt. This area is a sequence of high-grade metamorphic sediments that host a number of world-class graphite deposits, including Syrah Resource’s Balama Project, which holds 1.15 billion tonnes at 10.2% graphitic carbon and 0.23% vanadium.

As field operations continue, MOZ is planning to begin rock chip sampling and trenching as soon as possible, to help identify and confirm which of the 18 licenses it has an option over will be progresses with.

Discarding less prospective licenses will help minimise holding costs and allow MOZ to pursue only the licenses with the best chances of having commercial quantities of graphite. Once the licenses are issued, MOZ will proceed with more detailed exploration, including drilling and mapping with a goals to work up JORC resources and develop mining plans.

To support its exploration and acquisition plans, MOZ has embarked on a drive to raise at least $1.3M through a share placement and rights offer.

The placement was made to sophisticated and institutional investors of Alignment Capital Pty Ltd.

Meanwhile, MOZ is now well advanced in its drive to raise a further $925,000 before costs through a proposed non-renounceable 1 for 4 rights issue to eligible shareholders. Further details are expected to be released soon.