Metminco has quality suite of assets and cash for further development

Having commenced diamond drilling at its Tesorito gold prospect in the Quinchia district of Colombia in June, Metminco (ASX:MNC | LON:MNC) looks to be progressing nicely. 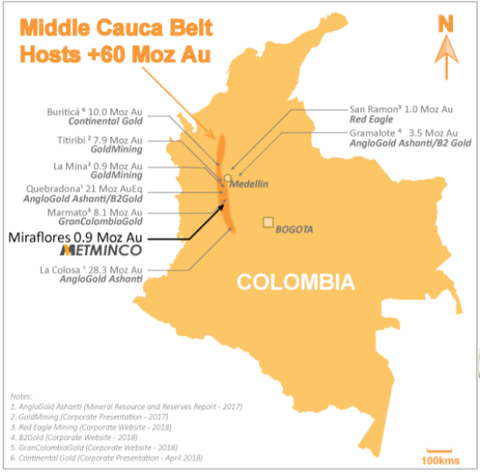 The company already has a project that has been the subject of a definitive feasibility study (DFS) which has determined that a 45,000 ounce per annum/9.5 year project could be undertaken.

Importantly, all in sustaining costs indicate that such a project would be positioned in the lowest quartile, leaving strong margins relative to the current gold price and resilience should weakness occur.

However the gold price is a moveable thing and interested investors should take all publicly available information into account before making an investment decision.

With regards to Tesorito, the 1500 metre exploration program is designed to confirm and expand the gold-copper porphyry style mineral system previously intersected by another operator.

This included one hole featuring 384 metres at 1.1 g/t gold from surface to end-of-hole.

Results from previous drilling are as follows.

The exploration program will also test a previously undrilled geophysical anomaly located approximately 300 metres to the north-west of TS-DH-02 as indicated below.

Management believes there is the prospect of encountering increasing copper mineralisation at depth.

Assay results from the diamond drilling at Tesorito are expected in August 2018, and based on management’s assessment of the type of mineralisation and survey data, the results could bring the company under the microscope.

While the data available in relation to Tesorito was enough to attract Metminco’s interest, the area is largely underexplored.

Given that the broader Quinchia portfolio is in a district known for its high grade gold/silver systems, the company could possibly be onto another La Colosa -type deposit.

More specifically, the mines are located within the same structural trend as La Colosa and Marmato, being the mid-Cauca porphyry gold belt.

It is worth noting that this isn’t just a broad-based nearology play.

As indicated below, the Quinchia portfolio is only six kilometres south of Marmato. 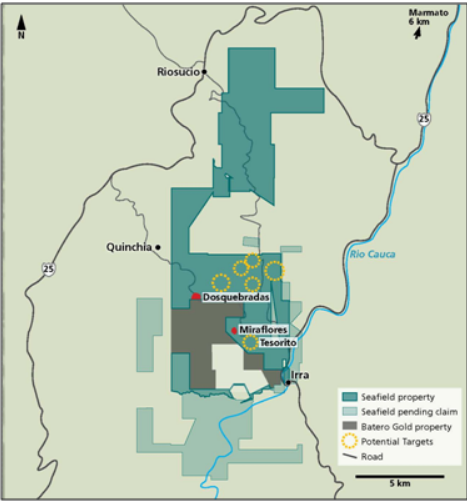 The background behind Metminco gaining ownership of the Quinchia portfolio is somewhat complex but interesting.

The company completed the purchase of Minera Seafiled SAS from RMB Australia Holdings Ltd on June 20, 2016.

Minera Seafield, now Miraflores Compania Minera SAS (MCM) owns 100% of the Quinchia Gold Project where a mineral resource of 2.8 million ounces of gold had been estimated.

The Quinchia Portfolio covers about 6000 hectares of granted concessions and an additional 3800 hectares of pending applications.

As indicated above, several deposits and exploration targets have been identified including Miraflores, Dosquebradas and Tesorito.

Dosquebradas has an inferred resource of 920,000 ounces at 0.5 g/t gold, but Miraflores has had the most work done in terms of crunching the numbers to bring it into production.

A feasibility study completed in October 2017 established a proven and probable reserve estimate at Miraflores of 4.32 million tonnes at 3.3 g/t gold for 457,000 ounces of gold.

A DFS completed in late 2017 determined that a 45,000 ounce per annum operation could be established with a mine life of 9.5 years. 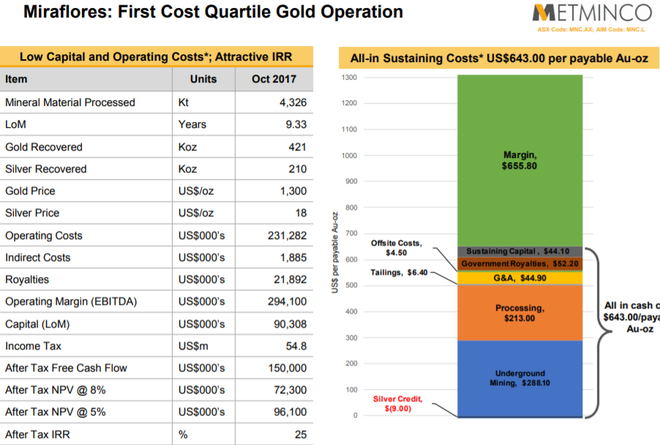 All in sustaining cost estimates of US$643 per ounce leave a healthy margin of about US$630 per ounce based on the current gold price.

This equates to about $850 per ounce in Australian currency terms.

Option agreement with AngloGold Ashanti is a bonus

It is only 1.5 kilometres south of Tesarito, and management is negotiating exercise of the option with AngloGold Ashanti.

The $3.4 billion capped AngloGold Ashanti, the US$20.6 billion-capped Newmont Mining Corp (NYSE:NEM), and US$3.6 billion IAMGOLD (TSX:IMG) each have operations in Colombia which you can read more about in the Next Small Cap article: Cashed Up Micro-Cap Hunts for Gold in Colombia.

Cashed up to embark on exploration campaign

Metminco raised about $5.6 million before costs in April leaving the group with circa $3 million to fund its exploration initiatives.

This will provide the funds required to investigate other highly prospective targets.

Given that 30 per cent of the company’s market capitalisation is accounted for in cash, Metminco could be considered as due for a rerating.

It isn’t difficult to see $6 million in value in the company’s assets, particularly given the after-tax net present value (NPV) of US$72 million attributed to Miraflores in the DFS.

Although the company does remain a speculative stock and investors should seek professional financial advice if considering this stock for their portfolio.

The completion of an environmental impact assessment and permitting will continue throughout 2018, and consideration will be given regarding higher grade opportunities that would enhance the NPV.

The company’s balance sheet could be further strengthened by the divestment of non-core projects in Chile.