Over the last two years, MEU has discovered a portfolio of 10 new gold-in-calcrete anomalous zones on its tenements surrounding the Challenger Gold Mine, which has produced more than 1.2 million ounces of gold over its life.

Each of these zones have been carefully refined and checked by follow-up infill sampling to define consistent anomalous zones of gold-in-calcrete.

Intriguingly, this is the first substantial program of drill testing new gold targets in the north-west Gawler Craton carried out by any company for at least the last ten years.

The AC drill program will comprise up to 60 drill holes, drilling a total of around 3,000 metres, with hole depths to 50 metres. Drilling is anticipated to take around two to three weeks.

Interestingly, this is the same method which led to the discovery of both the Challenger Gold Mine and Aurora Tank — via drill testing gold-in-calcrete anomalous zones.

10 of the new targets are gold; one target is polymetallic. These can be seen below circled in red: The objective of the program is to detect gold mineralisation or secondary gold dispersion underneath the gold-in-calcrete anomalies discovered by MEU. If gold mineralisation or secondary gold dispersion is detected below any of these anomalies, MEU will implement a more intensive follow-up drill program, which could potentially lead to a new gold discovery.

MEU noted that there are too many targets to describe each in detail; instead, the company has provided a look at two of particular interest — namely, Target 1 (CAR) and Target 8 (Polynorth).

The CAR prospect was originally identified by the Tarcoola Tallaringa Bedrock Drilling Project (a government research program) in 1991 when stratigraphic drill hole CAR 84 identified anomalous downhole gold. No further work was carried out at that time or since.

In early 2016, MEU commenced a calcrete sampling program on a 400 metre spaced grid over the host Muckanippie tenement, which resulted in the identification of a broad gold-in-calcrete anomaly near the same historic drill hole CAR 84. Later that year, MEU carried out a more detailed 100 x100 metre infill calcrete sampling program, resulting in the gold-in-calcrete anomaly seen in the image below: 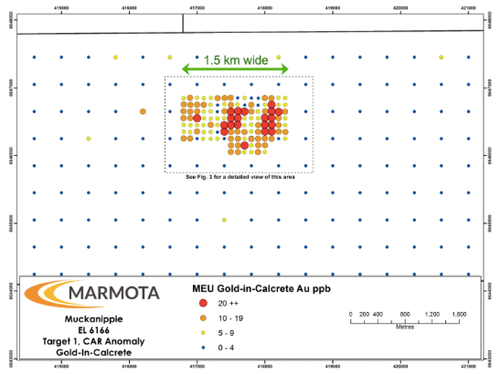 This target appears to be located at a possible contact between Hiltaba suite granite and Gawler Range Volcanics, suggesting at the possibility that it may be related to a Hiltaba age sub-volcanic or porphyry intrusive complex with large tonnage potential.

The initial calcrete samples that led to the discovery of this anomaly were collected by MEU in late 2015. Infill 100 x100m calcrete sampling was completed in 2016, and the target was cleared for drilling in late 2017. 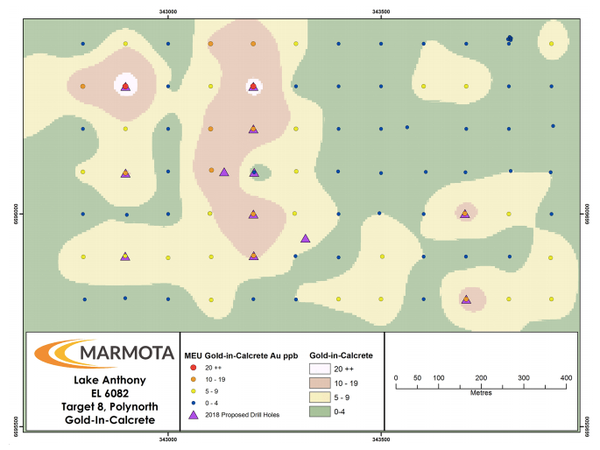 It is worth noting that the magnetic anomaly is not quite coincidental with the gold-in-calcrete anomaly and the strike of both features is different. The anomaly appears to trend parallel to probable fold hinge zone trends in the metamorphic basement which wrap around the northern end of the associated magnetic anomaly. This is thought to be a structurally favourable location for gold mineralisation.

Moreover, the linear nature of the anomaly is suggestive of a shear zone environment, which fits with the Archaean Mulgathing Complex regional geological basement.