These results come from the recently completed Phase 1 drilling program, which targeted the established SPD deposit, where there is currently a resource of 513 million tonnes at a grade of 0.78% vanadium pentoxide, defined under the SAMREC code. This resource is a “foreign resource”, which is ‘foreign Resource’ (as defined in the ASX Listing Rules).

These latest results will form part of a maiden JORC Resource, which is expected to be published next month.

The latest assays, which are quoted as whole-rock, or pre-concentrate, grades, include: 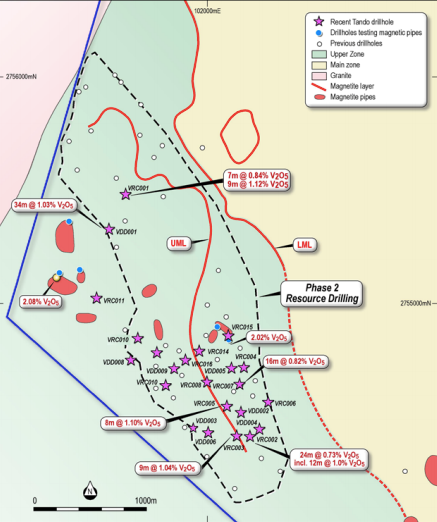 Phase 1 drilling was aimed to define a maiden JORC-compliant Mineral Resource. As TNO announced last week, Phase 1 is now completed and all outstanding assays are expected to be received during the next month.

A Phase 2 drilling program is now underway with two rigs operating. Phase 2 aims to upgrade the maiden JORC Resource to an Indicated category (provided results are as anticipated), with 58 holes for 5,550 metres currently planned.

Drilling is also underway to test the potential of the surrounding high-grade vanadium pipes at SPD (as shown in the image below), which have the potential to complement a low-cost DSO operation at the project.

Tando managing director, Bill Oliver, said: "These results are further evidence of the high-grade, near-surface vanadium mineralisation at SPD. Results such as these will underpin the impending maiden JORC Resource.

"While we await assays to finalise the resource estimation, the phase two drilling program is continuing along with drilling of the shallow vanadium pipes nearby. This multi-pronged strategy will give us strong newsflow for several months as we push to unlock the value of this outstanding asset."

As part of drilling activities, the drilling contractor has recruited employees from the local communities, assisted by TNO — this expected to be the first of many opportunities for the project to provide benefits such as employment and training for these communities.

The cost to complete the entire Phase 1 and Phase 2 drilling program and the subsequent Resource estimations is estimated at A$1.4 million. TNO is fully funded for the drilling program, as well as the corresponding metallurgical and mining studies.

Currently, 85% of the world’s vanadium is produced in China, Russia and South Africa. TNO’s SPD Vanadium Project is located in one of these regions and has the potential to be of global significance, based on the tonnage and grade in concentrate (as shown below). 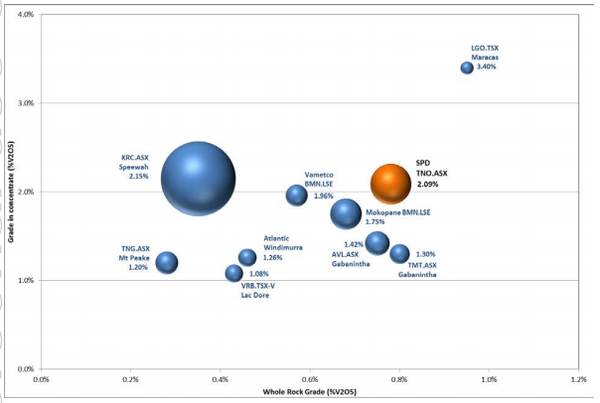 The SPD Vanadium Project is located in a similar geological setting to the mining operations of Rhovan (Glencore), Vametco (Bushveld Minerals) and Mapochs (International Resources Ltd) in the Gauteng and Limpopo provinces of South Africa.

Of these, both Rhovan and Vametco processing plants feature refining to generate products used in the global steel industry, with an aim to develop downstream processing to produce materials used in the battery market.

The SPD Vanadium Project is located only 30km from the currently dormant Mapochs mine, which has a processing plant and railway infrastructure. 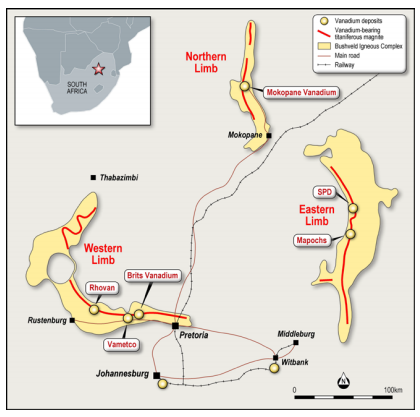 TNO has targeted vanadium as a commodity of interest due to its usage in energy storage — specifically vanadium redox flow batteries (VRFB). It is anticipated that forecast increase in battery usage for large scale energy storage will lead to a significant increase in the demand for vanadium.