Ardiden Limited (ASX:ADV), the junior graphite explorer who just last month ventured into the lithium space, has announced it will commence diamond core drilling on its Seymour Lake Project immediately.

The Seymour Lake Project is located near the town of Armstrong in Ontario, less than 4 hours from a key infrastructure hub at Thunder Bay and within 100km from the US border. The lithium-beryllium-tantalum project comprises five patented mining claims covering an area of 912 hectares. 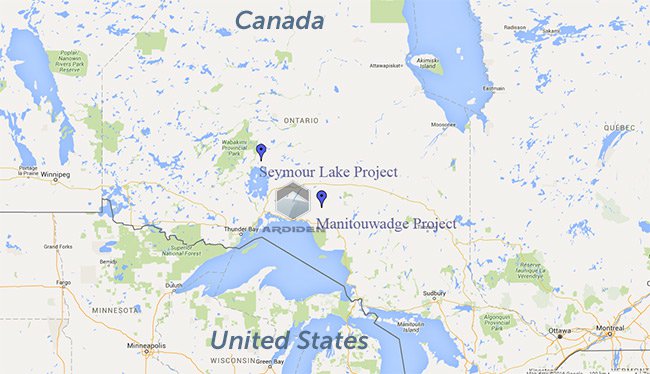 In an ASX market update, ADV says it received drilling approvals from local Canadian authorities and has already selected a local drilling contractor to commence “in the coming week”.

Additionally, ADV hopes to generate cash flow from sales of other minerals found alongside lithium exploration. Tantalum and beryllium grades of up to 1180ppm (Ta2O5) and 1270ppm (BeO) respectively, were intersected in the past, which could provide ADV with by-product credits currently worth around US$500 per kg.

ADV says that the upcoming drill program “will also help to define the boundaries of the main outcropping spodumene-bearing pegmatite structures which host the lithium mineralisation at the Project”.

With over 4,000m of historical diamond drilling, the Seymour Lake Project hosts lithium-beryllium-tantalum mineralisation within the Caribou Lake Greenstone Belt, 230km north-north-east of the mining centre of Thunder Bay in Ontario.

Combined with the historical data, the results of the upcoming drilling and exploration program will enable Ardiden to make a detailed assessment about the potential of the Seymour Lake Lithium Project before considering whether to exercise its option to purchase the project.

If ADV finds sufficient commercial potential at Seymour Lake, it will likely pay around C$1,000,000 to claim full ownership.

The reasoning behind venturing in lithium exploration is because ADV is aiming to supply the growing market for lithium-ion batteries that require large amounts of both graphite and lithium. With its Manitouwadge graphite project progressing on schedule, ADV hopes to progress a lithium project in tandem, therefore capturing the entire value chain in supplying battery manufacturers.