Latin Resources prepared to commence 3000 metres of drilling at Catamarca

Latin Resources (ASX:LRS) announcement on Wednesday morning that it had received approval to commence drilling at its Catamarca lithium project in Argentina triggered an immediate share price spike of 15%.

The initial exploration drilling program will incorporate a 24 hole reverse circulation program with approximately 3000 metres to be drilled across four prospects.

While this program will take nearly three weeks, management expects assay results to filter through in February.

The company has been actively collecting field samples at the Catamarca exploration tenements, particularly in areas that were previously mined for the lithium minerals spodumene in both Villisman and Ancasti districts.. 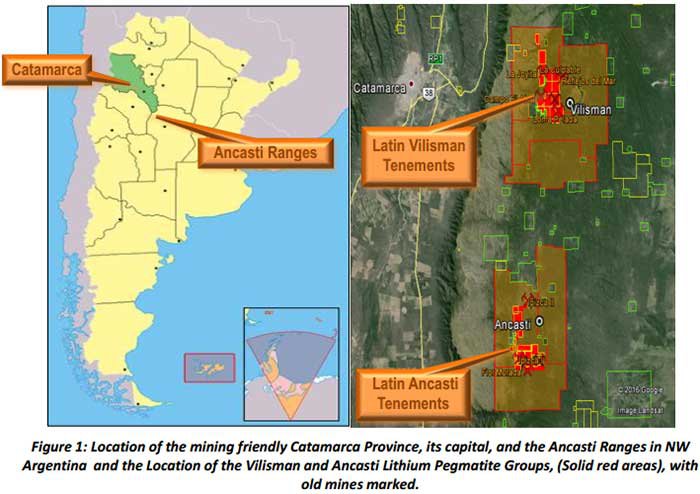 Sampling and mapping was undertaken to confirm the presence of lithium and to estimate the size and orientation of the pegmatite dykes containing the spodumene mineralisation.

Given that the pegmatites had previously been mined for spodumene, management said the remaining mineralisation is not necessarily representative of the overall orebody due to high grade zones having already been removed.

Managing Director Chris Gale was upbeat regarding the 29 rock chip samples that were taken from seven prospects, saying, “The results returned have confirmed that economic grades of lithium are contained within the target prospects with 19 of the 29 samples being 1% lithium dioxide or higher with best grades showing from 2.02% lithium dioxide to 4.46% lithium dioxide with an average grade of 1.42%”.

Providing some insight into the company’s activities over the next 12 months, Gale said, “The 2017 year is shaping up to be an extremely positive one with drilling at Catamarca and further exploration work commencing at the San Luis and Ansotana projects in Argentina”.

Gale also drew attention to the fact that the group has a promising copper project in Peru that is being actively explored with the final geophysical ground work being completed by joint venture partner, First Quantum Minerals.