Shares in Inca Minerals (ASX:ICG) opened nearly 10% higher on Thursday morning after the company released some of its most promising exploration results to date.

Recently resumed mapping and sampling at the Riqueza project has resulted in the delineation of rich new forms of mineralisation, resulting in management taking the decision to extend the surface mapping and sampling program to other parts of the Humaspunco Hill. The drilling campaign will include these new targets.

The recent work has resulted in the identification of a large structure, the Callancocha Structure, as being a major new drill target. It is believed to be a feeder zone responsible for much of the Zn-Ag-Pb mineralisation at Humaspunco. It is a large project-scale fault comprising several mineralised veins, up to 5m thick. Importantly, mineralisation associated with it appears to continue unbroken into the adjacent cross-cutting EW veins and mantos.

Another mineralised structure has been recognised that runs perpendicularly to the Callancocha Structure. This fault is probably related to regional folding.

The occurrence of mineralised faults, mineralised breccia-faults and mineralised tension gashes strongly indicate that fluids bearing zinc, silver and lead were pumped into the limestone sequence when the faults were active.

The recent results are very positive says ICG’s Managing Director Ross Brown. “There are more mineralised structures, veins and breccias occurring at the surface at Humaspunco than previously indicated; that mineralisation now appears continuous between the Callancocha Structure and the EW veins and mantos and; that mineralisation is now believed linked to fault activity.

There is an expectation that because of this mineralisation at Humaspunco “we may see even more mineralisation continue at depth than we already see at surface” Mr Brown concludes. 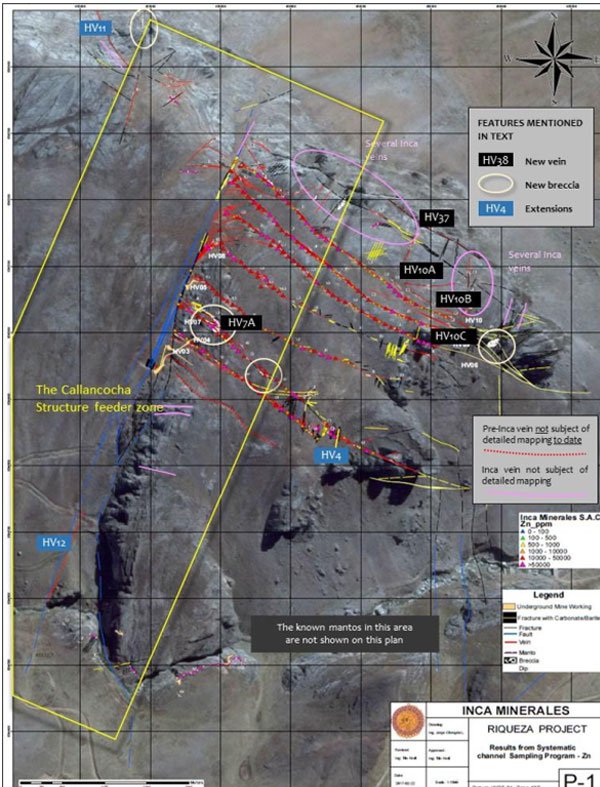