Kingston Resources Limited (ASX:KSN) today updated the market on its exploration progress at its 2.8 million ounce Misima Gold Project in PNG and its Livingstone Gold Project in WA.

A team of local field assistants are currently digging trenches across mineralised trends at the southern end of the Umuna East target area — an area the company believes to be under-explored but with high potential for gold mineralisation.

The trenches will provide a soil profile for channel sampling and structural mapping, with the objective of getting a clearer idea of the mineralisation between the Kulumalia and Padakol fault structures for a 2018 drilling campaign.

The below map indicates KSN’s current targets at the Misima Project: 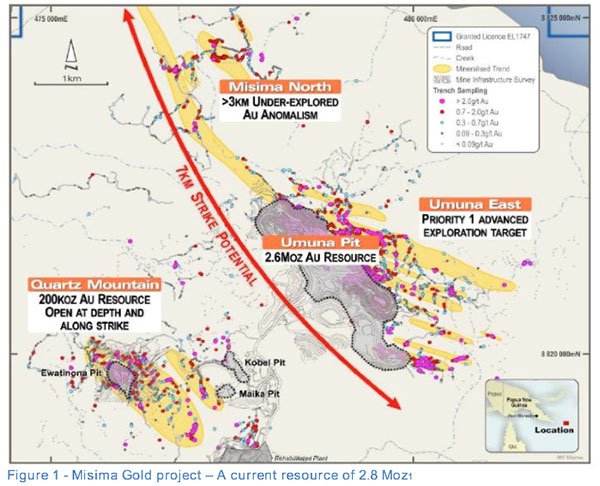 During the first quarter of CY2018, KSN will undertake further exploration work at Misima including re-establishing an operational base and logistics capabilities; geochemical field work, surface trenching and mapping on the Umuna East splays; structural mapping and interpretation of the Umuna East splays to build an improved understanding on the controls on higher-grade gold mineralisation; and completing a drilling tender with the aim of mobilising the drill rig as early as possible in the new year.

It is early stages for KSN here and investors should seek professional financial advice if considering his stock for their portfolio. 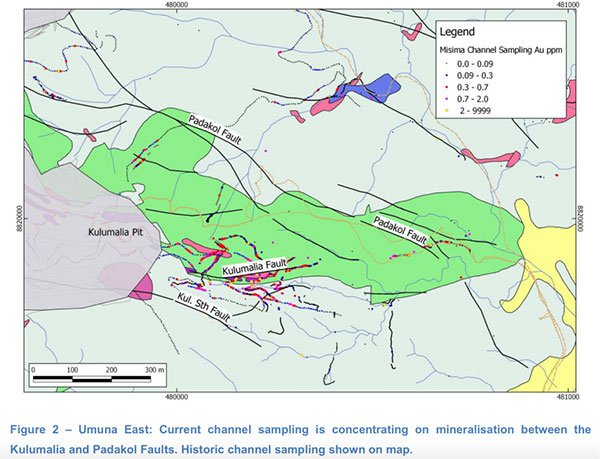 In commenting on today’s update, Managing Director Andrew Corbett said: “The Kingston geology team, led by Andrew Paterson, has done an outstanding job to mobilise a field team on Misima within three weeks of completing the transaction.

“Our number one priority is to commence drilling as early as possible next year, with a clear focus on adding ounces at the under-explored Umuna East prospect to complement the current 2.8Moz JORC resource.”

KSN also provided an update on its Livingstone Gold Project in Western Australia, including the news the project has received Exploration Incentive Scheme funding under the state government’s co-funded drilling program.

In effect, this provides KSN with $75,000 to go towards the drilling planned for the Livingstone Project in the new year. The company also confirmed it would be exercising its option to acquire 75 per cent of the project, having completed a successful exploration program in the 12-month option period.