Kingston unveils diamond in the rough at Livingstone

The initial batch of assays has been returned from the first 11 holes (954 metres) of a 54-hole (4525 metres) program completed at the Kingsley Prospect, which was discovered by Kingston in 2018.

These initial results support the evolving mineralisation model, developed from knowledge gained from a structural geological review conducted over the wider Livingstone Project, including the Kingsley prospect, in late 2019. 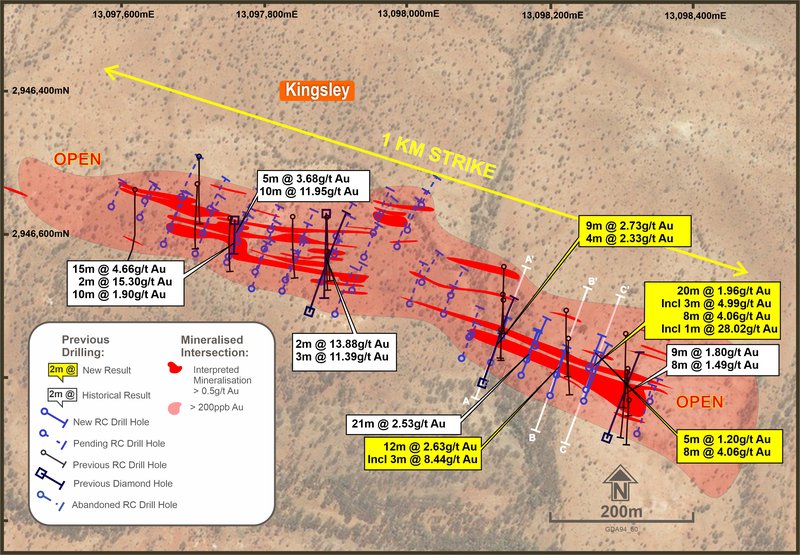 There were some high-grade sections within the aforementioned intercepts including two 1 metre sections of 15.84 g/t gold and 28.02 g/t gold from 55 metres 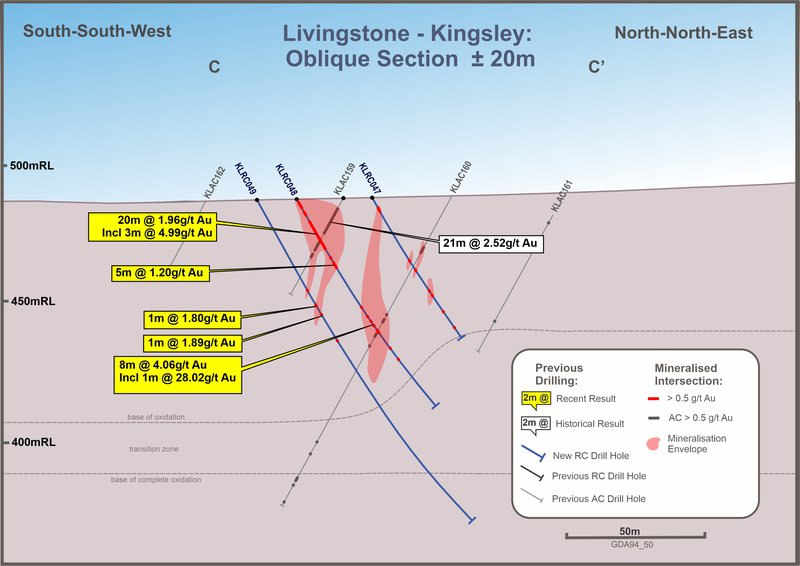 Further drilling is planned at the Stanley, Homestead and Winja prospects in September.

At this point, an additional 1000 metres of reverse circulation drilling will be undertaken at the Homestead deposit, host to an historic shallow 50,000 ounce gold resource (JORC 2004), as well as the high grade Winja prospect. 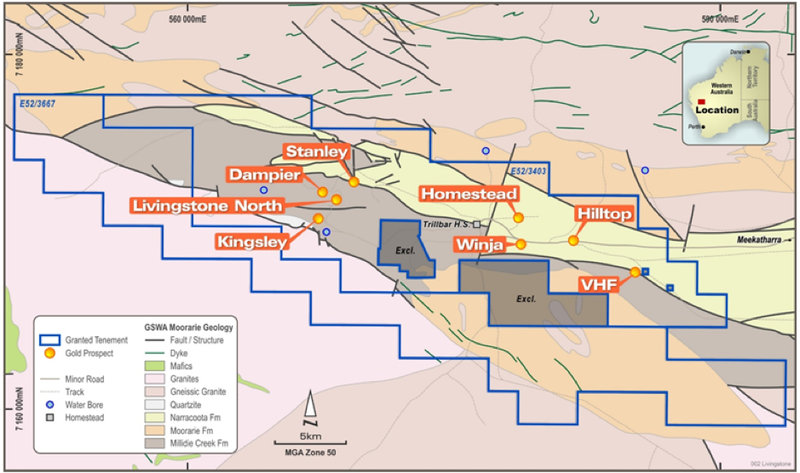 Only 800 metres of this initial discovery has been meaningfully drilled.

Importantly, the mineralisation currently remains open to the north-west and east where a 1.2 kilometre strike length of known mineralisation is yet to be fully tested.

Commenting on the promising exploration results and the company’s near term strategy, Kingston’s managing director Andrew Corbett said, “Our 2020 exploration program at Livingstone is off to a flying start with the first batch of assays from the recently completed RC program returning some outstanding high-grade intercepts, in several cases within broader widths of significant mineralisation.

‘’I am looking forward to receiving further results in the coming weeks.

“We are also looking forward to getting back into drilling at Livingstone in relatively short order to complete the co-funded drilling at the Stanley target and to undertake some further drilling at the Homestead Deposit which hosts an historic shallow 49,900 ounce gold (JORC 2004) Resource.

‘’We will also conduct drilling at the high-grade Winja prospect, which is where Kingston first drilled at Livingstone after acquiring the project in 2017.

The location, nature of the intercepts and strike potential at Livingstone referred to by Corbett are shown below. 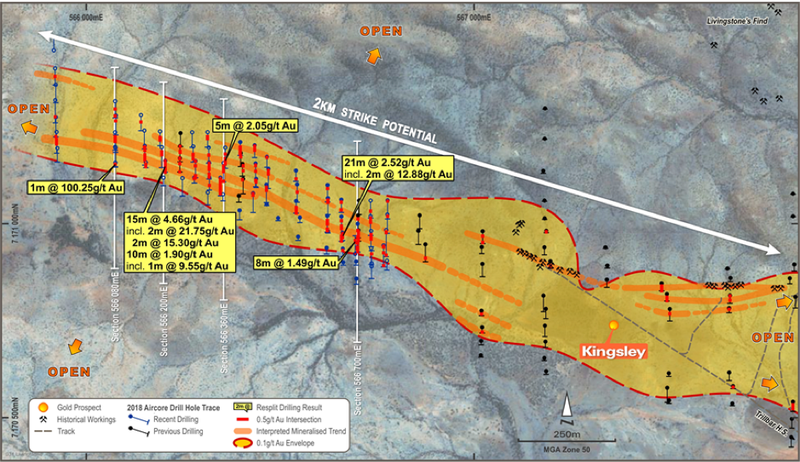 On track to complete maiden resource estimate at Kingsley

The final results from the current program will be incorporated with results from prior RC drilling and the diamond drilling program, all completed by the company in 2019.

The planned co-funded drilling at Stanley Deeps supported by the Western Australian Government Exploration Incentive Scheme was suspended due to difficulties with ground conditions.

This will now be completed in early September.

Focus turns to Homestead and Winja 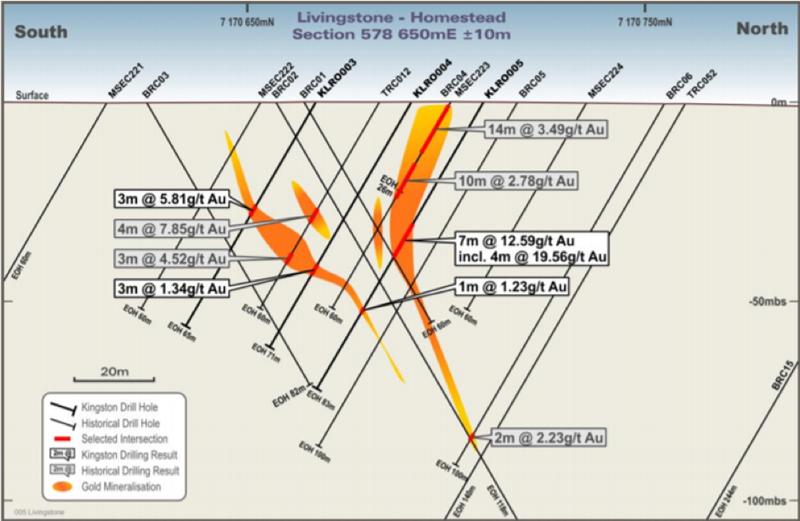 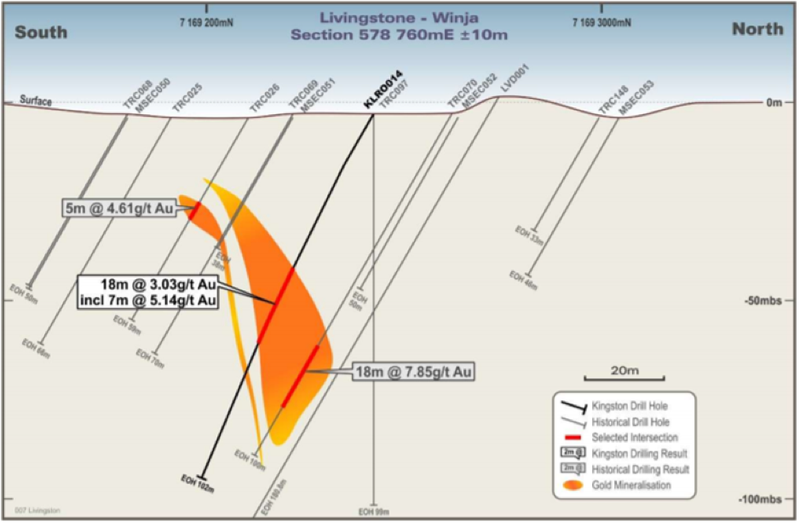