A new batch of assays have now been returned from a further 25 holes spanning approximately 2300 metres.

The identification of further shallow high-grade gold supports management’s decision to conduct an aggressive exploration program that will provide the foundation for a mineral resource estimate.

These latest results stem from a 54-hole/4.5 kilometre program recently completed at the Kingsley Prospect.

Assays from the remaining 13 holes covering about 1200 metres are due by the end of September.

Confirmation of shallow high-grade mineralisation over one kilometre

The initial results coupled with the most recent returns further support the evolving mineralisation model developed from knowledge gained from a structural geological review conducted over the wider Livingstone Project, including Kingsley, in late 2019.

Commenting on this latest round of results and pointing to the company’s broader exploration strategy, managing director Andrew Corbett said, “We are continuing to see high grade intercepts within broader widths of significant mineralisation in this latest batch of assays, which is a very encouraging development.

“The drilling is confirming the continuity of shallow, high-grade gold mineralisation over a 1 kilometre strike length at the Kingsley Prospect.” 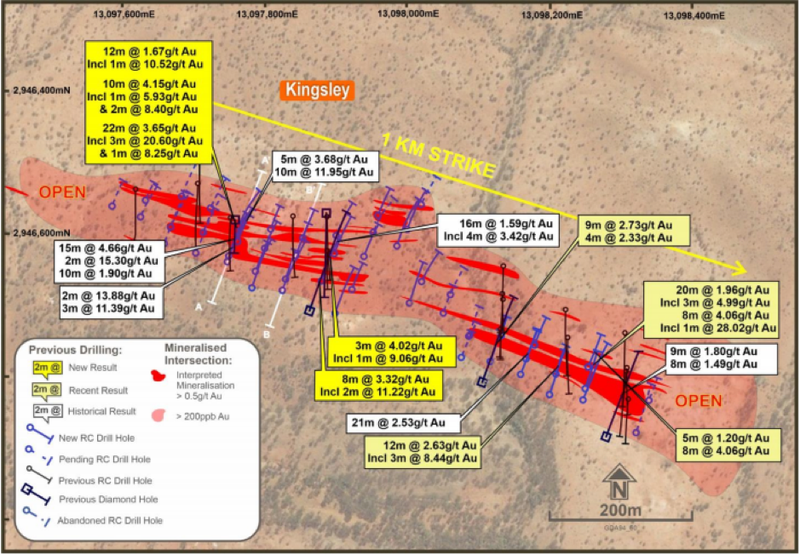 Corbett went on to say, “I am looking forward to receiving the remaining results in the coming weeks which will allow us to start work on a maiden JORC compliant Mineral Resource Estimate (MRE).

“I am also looking forward to getting back into drilling at Livingstone with a rig due back on site by the end of the month to conduct the co-funded drilling at the Stanley target and to undertake further drilling at the Homestead Deposit, which hosts an historic shallow 49,900 ounces gold (JORC 2004) Inferred Resource, as well as at the high-grade Winja prospect.

“Our ongoing exploration program at Livingstone will run concurrently with mining studies at the flagship 3.2 million ounce Misima Gold Project in Papua New Guinea, where we continue to make positive progress.”

The results from the current program will be incorporated with results from prior RC drilling, the data from the favourable preliminary metallurgical test work and the diamond drilling program completed by the company in 2019.

The co-funded drilling at Stanley through R21 of the WA Government Exploration Incentive Scheme is due to commence in late September with a rig due to mobilise to site by the end of the month.

This will be followed by an approximate 1000 metre RC program at the Homestead Deposit, which hosts an historic shallow resource of nearly 50,000 ounces gold, and the high-grade Winja prospect to the south.

Prior results at Winja included 18 metres at 3 g/t gold from 55 metres, including 7 metres at 5.2 grams per tonne gold from 49 metres in a chute like structure of high-grade mineralisation.

Consequently, this is a much anticipated exploration program with the potential to provide the building blocks for a mine development.