Segue Resources (ASX:SEG) has outlined the scope of work at its Plumridge Nickel Project in WA, the first work done at the project since multi-billion dollar MMG Ltd farmed into the project.

It has told its investors that MMG would lead the way on conducting a high resolution infill gravity survey over three key tenements at the nickel-copper project, a survey which is set to start next week.

The survey will consist over 6000 stations on a 400m by 200m grid, basically filling the gaps between an existing survey previously done by SEG.

The upshot of the survey is that the joint venture will then have an even more solid dataset to work from as it seeks to delineate possible drilling targets into the future.

According to the terms of the farm-in signed with MMG back in September, the Hong Kong-listed company will earn a 51% stake in the project by spending $6.5 million in exploration by the end of 2019.

However, it can bump this up to 70% by tipping in another $7.5 million after that within a two-year window.

SEG managing director Steven Michael said the fact it was spending money early meant MMG was dedicated to the project.

“MMG’s technical and financial resources and speed of execution are crucial elements in delivering value to Segue shareholders,” he said. “The completion of a major infill gravity survey before the end of 2015 clearly demonstrates MMG’s commitment to the Plumridge JV.” 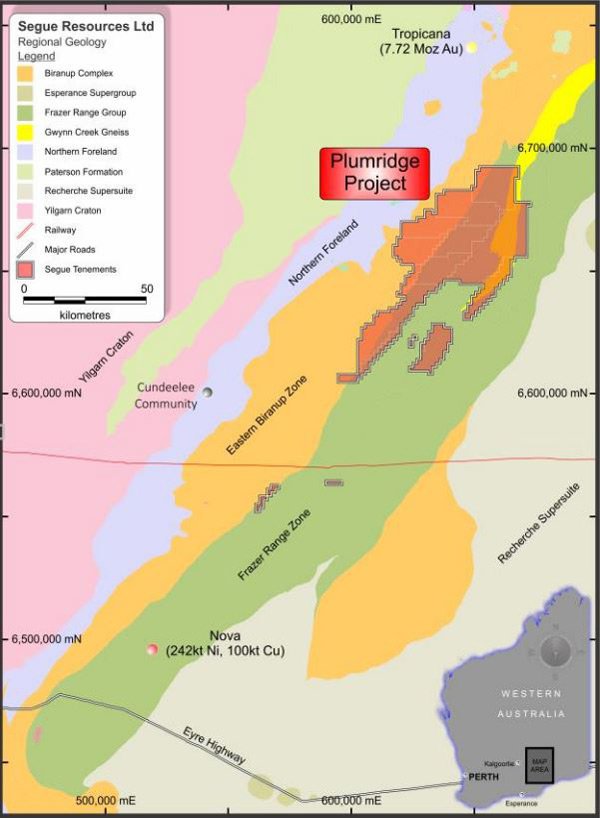 Location of the Plumridge Nickel Project

Prior to the joint venture forming in September, Segue had completed several surveys over the project area.

SEG geologists conducted detailed surveys of the geology below the surface from 19,406 stations, covering an area of 3000 sq.km.

SEG also recently completed a limited reverse circulation drilling campaign at the project for a total of 985m across four target areas. It was aimed at testing a number of gravity anomalies brought up during the gravity survey.

In other SEG news, it announced that it would start its maiden aircore program at its Salt Creek Project, with results due back mid-November.