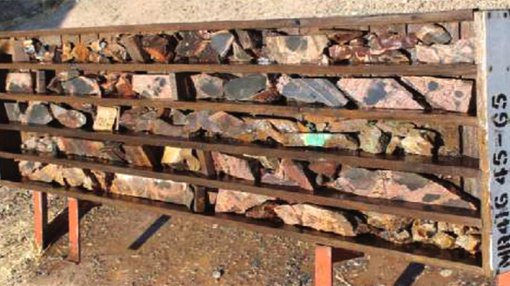 This information is critical in understanding the geological model, and has helped management refine its exploration strategies moving forward.

It has also assisted in understanding the strategy behind the historical exploration programs at Kalengwa South.

Re-logging work focused on 8 historical diamond drill cores at the Karibarembi and Chimena Prospects, and is now complete. XRF analysis of the diamond core to verify mineralisation is in progress, as are desktop studies.

The re-logging has confirmed similar lithologies and alteration across both the Karibarembi and Chimena prospects.

At Karibarembi, the ore-bearing mineralised breccia is interpreted to have a shallow dip and increasing thickness to the south, whilst work at Chimena suggests that historical drilling may have missed near surface anomalies.

A 500 metre by 50 metre geochemical anomaly has been re-interpreted and subsequently integrated with updated information from re-logging of diamond core.

Analysis of the results has shown that historical drilling targeted the geochemical highs from the soils, with no consideration given to topography and drainage.

It is these types of crucial insights that may lead to the discovery of an economic deposit.

Further work is being undertaken to ascertain whether the anomaly is an expression of source mineralisation underneath, or if it has been transported.

A site visit by in-country manager Nathan Sabao earlier in the year confirmed the presence of a historical artisanal pit above the eastern part of the Karibarembi anomaly. Datasets are also being integrated into the desktop compilation to provide a better understanding of in-situ mineralisation.

The surface anomalism data has been integrated from historic contour maps of sampling, and combined with near-surface drilling which includes historic assays.

Particularly encouraging was the consistent breccia zone observed in holes 416 and 417.

This brecciated zone strikes north-south within a shale mudstone and appears to be thickening to the south. The historic drill pattern is focused on the orientation of the overlying surface anomalism, which may be affected by topography and drainage.

With increasing understanding of the orientation of mineralisation controls, additional drilling could identify extensions of higher grades than already intercepted at Karibaremi.

XRF readings were taken from archived half core from holes 416 and 417 to validate the reported assay results, and results were consistent with the historical data.

The Chimena Prospect lies about 12 kilometres west of Karibarembi. A 600 metre by 500 metre geochemical anomaly was defined by Roan Selection Trust in the 1970’s. Follow up work involved trenching, pitting, auger drilling and 4 diamond drill holes.

IRG is aware of an illegal mining operation from a small pit close to the Chimena anomaly and within IRG tenement boundaries. A site visit is currently being conducted to verify this, and confirm its significance and spatial relationship with historic anomalies.

Geology intersected in the four diamond drill holes are very similar to those of the Karibarembi Prospect, and a weakly mineralised breccia zone was also logged.

The Chimena Prospect appears to show that historic diamond drilling was performed on a transported geochemistry soil anomaly, which explains the low grades encountered with diamond drilling.

This is the final step in the approvals process, and granting of these approvals will allow exploration to commence. ZEMA and the Minister for Mines are expected to meet over the next week and executed approvals are expected shortly thereafter.