Artemis Resources (ASX: ARV) announced on Thursday that in-situ gold nuggets up to four centimetres long in archean conglomerates had been reported from the first trench at its Purdy’s Reward joint venture prospect.

The sample originates from a one metre thick reef near the top of an 11 metre thick stacked sequence of mineralised conglomerate horizons. Purdy’s Rewards is part of an 8 kilometre trend that has been identified by Novo to be highly prospective for conglomerate gold mineralisation considered analogous to the Witwatersrand in South Africa.

Understanding the ‘unique’ nature of this discovery provides some insight into why ARV’s share price responded so sharply.

Of course, it should be noted that ARV is still an early stage play and its share trading patterns should not be used as the basis for an investment as they may or may not be replicated. Those considering this stock should seek independent financial advice.

Analysts at Sprott Capital Partners provided some background regarding the Witwatersrand analogy.

The following is an excerpt from Sprott Capital Partners explanation of ‘Witwatersrand’, clearly highlighting the potential upside that lies in the Purdy’s Reward find.

For context, around 180,000 tonnes of gold has been mined in the history of the world. From this, around 35%, or circa 2000 million ounces, has come from Witwatersrand. The circa 70,000 square kilometre basin, which underlies Johannesburg and hosts mines with depths up to more than 3500 metres, formed approximately three billion years ago at the same age as the Pilbara.

Some theorise that an oxygen crash at the time from algae proliferation enabled gold to be mobilised more easily. More simply, the mantle was more active and crust thinner in ancient times, enabling more active trans-crustal hydrothermal systems, so the earth was more well-endowed with gold at this time (hence Archean belts being prospective).

No primary source has ever been found for the Wits deposits, making it an entirely alluvial build up (with some secondary remobilisation), precisely the same as is seen in Western Australia.

In terms of the potential impact on Canadian listed, Novo Resources (NVO CN), Sprott described the discovery as potentially game changing for the company, as well as the global industry.

The following five-day chart shows the circa 50% spike in Novo resources share price.

Where Artemis fits into the picture

As can be seen on the following map, the prospect lies in close proximity to a number of ARV’s wholly-owned projects and its established processing facilities at Radio Hill. 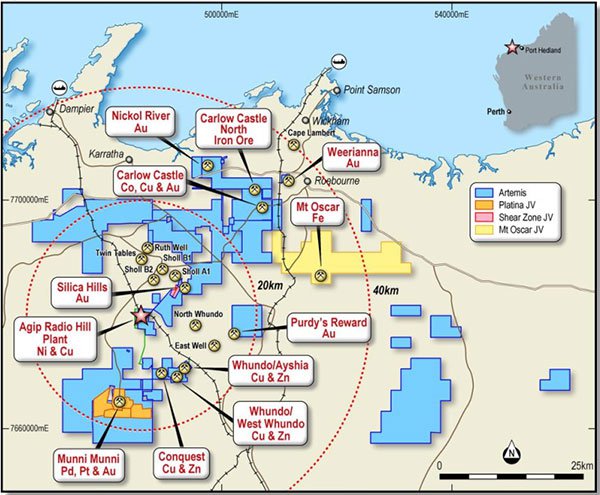 Novo Resources Corp is earning in to ARV’s Purdy’s Reward prospect as part of an overall $2m farm-in and 50/50 JV agreement on Artemis’s conglomerate gold targets on its extensive Karratha tenement package.

Commenting on this development, Artemis’s Executive Chairman, David Lenigas said, “We are highly encouraged that multiple small and large nuggets have been recovered from our first test trench at our Purdy’s Reward Gold Project, which we have in JV with Novo Resources Corp.”

Lenigas highlighted the fact that this is a very unusual gold deposit, but one can only be excited by the prospectivity and potential of the new discovery. He confirmed Novo is planning to significantly step up their exploration efforts with ARV expecting a great deal of news flow to shareholders as this project moves forward at pace.

Judging by the 60% surge in ARV’s share price there are plenty of investors getting set before the news flow unfolds.

However, as stated previously share trading patterns should not be used as the basis for an investment as they may or may not be replicated. 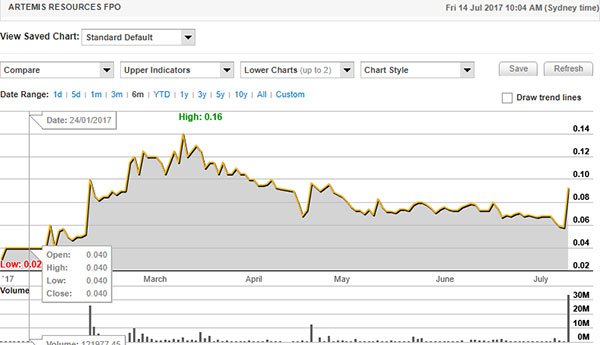 Release of assay results could be the next big kicker

To provide some understanding of the exploration process that took place prior to identification of the gold nuggets, fresh rock was encountered at just 30-50cm below a thin soil horizon. Many coarse gold nuggets were readily visible during excavation, the largest of which was approximately four centimetres long. Bedrock was comprised of heterolithic cobble conglomerate with a sandy matrix.

Given the extremely coarse nature of gold found in conglomerates at the project, the group has collected a trial bulk sample from the Purdy’s Reward prospect to help establish sampling and assay protocols for the project moving forward.

Approximately 700 kilograms of mineralized conglomerate was collected from a 2×2 metre exposure of bedrock at the bottom of a half-metre deep trench. The floor of the first 2×2 metre pit was swept with a metal detector to evaluate distribution of nuggety gold, resulting in multiple zones of coarse gold being evident.

The sample was split into duplicate sub-samples that were shipped to Nagrom’s Metallugical Laboratory in Perth, WA, where the samples will be subjected to a series of tests including gravity gold recovery and cyanide leaching. This test work will provide the first indication of the grade of mineralisation.

Data from sampling will assist Novo in determining the best means of future trench and drilling at Karratha. The company plans to undertake full-scale, systematic trench bulk sampling along the strike of the conglomerate package at Purdy’s Reward beginning in a few weeks, the results of which could potentially be market moving for ARV.