More than half of the 33 assay results released today have a combined zinc-lead grade in excess of 20%. Included in the assay results are peak values for zinc, lead and silver of 34% Zn, 27% lead and 427 g/t silver respectively. The Company has also advised today that these assays were taken from veins at two of the prospects within the project (Humaspunco and Pinta) and that assays for mantos taken from the same prospects are pending.

While this news could provide further share price momentum, it should be noted that the company’s trading history is not an indication of future performance and as such, this shouldn’t form the basis of an investment decision and professional financial advice should be sought.

This builds on positive news released at the end of August regarding the discovery of 17 new veins and 14 mantos (a flat lying, bedded or deposit usually copper, lead, zinc, silver – terminology mainly used in South America for a hydrothermal replacement deposit of carbonate beds).

It was highlighted by management at that stage that the manto sequence appeared to extend over a strike of 2 kilometres with 13 of the newly discovered mantos relating to the Humaspunco prospect.

The Company is advising that assay results to date confirm a high grade and extensive network of mineralised veins and mantos with average grades from just the veins sampled in the most recent program being 10.7% zinc, 205 grams per tonne silver and 11.7% lead (manto assays are pending).

The strong grades across each mineral category and the associated geological formations that have been intersected suggest that Humaspunco could be part of a large system that may host a commercial zinc, silver, lead deposit.

However, it should be noted that these are only early stage results and shouldn’t be used as a basis for estimating a likely mineral resource. As such, these shouldn’t form the basis of an investment decision and professional financial advice should be sought.

More clarification should come to light with drilling and on this note Managing Director, Ross Brown said, “As we approach drilling, I fully expect the total number of veins to increase to the extent that Humaspunco may be viewed as a single network of criss-crossing mineralised systems with veins repeating at all scales”. 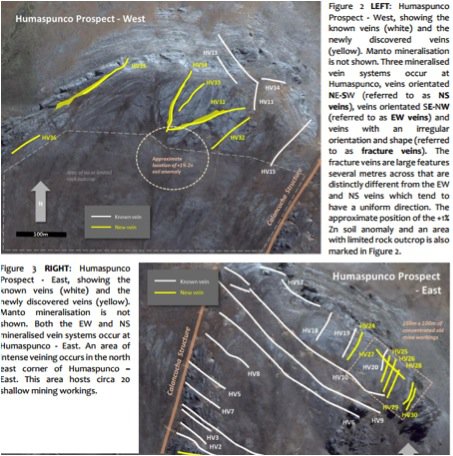 While stating it was inappropriate to provide any estimate of tonnage at this time, the Company noted that, in the event the newly discovered mantos are of similar grades to those reported today, then it had every reason to be extremely optimistic about the scale and potential of the Riqueza project and future work will focus on moving towards exploration target estimates and a possible maiden resource.

In the near term, detailed stratigraphic analysis of the manto samples is currently determining the relative position of each new manto occurrence identified in the August program to assess how many new mantos horizons were discovered.