European base metals explorer, Zinc of Ireland (ASX: ZMI) this morning announced that a Phase 3 diamond drilling program is currently underway at its 100%-owned Kildare Zinc Project in Ireland.

The decision follows high-grade intercepts at the McGregor and Celtic Tiger prospects.

The company is aligning its zinc exploration pursuits with rising zinc prices, which it says are ‘heading north in a substantial and sustainable way’.

The reason for this optimism comes down to the fact that zinc is the world’s fourth most required industrial metal, yet stockpiles are at 12-year lows, while supplies continue to fall due to a shortage of large projects coming online.

In fact, current zinc supplies are similar to those in 2006, which led to a 300% zinc price breakout. 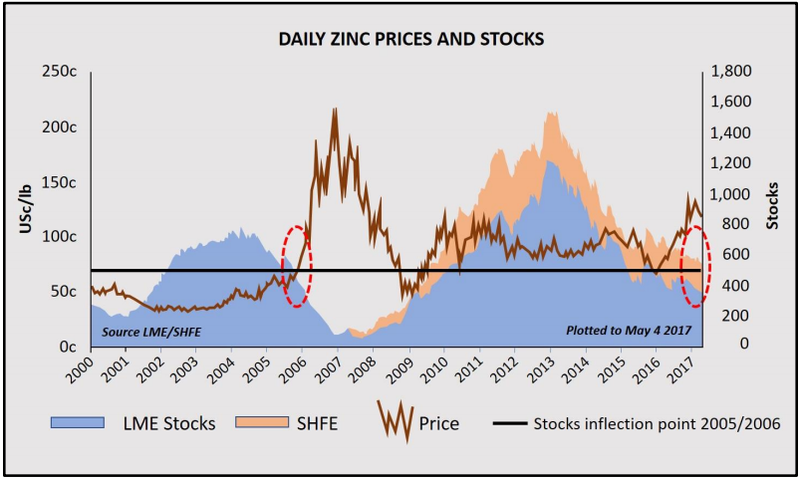 The first hole, 006, of the Phase 3 programme is underway at the McGregor Prospect where ZMI is seeking to extend mineralisation along strike and eastwards of the spectacular intercept in hole 003 that was announced in June.

More than 4,000 metres have been drilled at the project to date and so far the results have been spectacular, including:

Hole 006, that is currently underway, is the first of several holes planned at McGregor as ZMI aims to extend the thick, high-grade Base of Reef mineralisation.

This Phase 3 drill programme will ramp up in early September when a second drilling rig arrives at the project. This drilling will target the newly discovered Celtic Tiger prospect, which is located just one kilometre west of McGregor.

In the past year ZMI has delivered a Resource, arguably the best zinc drilling intercept of 2017, and a nearby discovery at Celtic Tiger within 200 metres of the surface.

The current JORC Inferred Resource at the Kildare Project is 5.2Mt at 8.6% zinc and lead (7.2% Zn & 1.4% Pb), including 3.5Mt at 10.1% zinc and lead. The current drill programme has potential to lead to a Resource upgrade later this year.