The Hunter prospect was recently discovered through geological ground reconnaissance, where a 60cm wide massive sulphide outcrop rich in sphalerite (zinc) and galena (lead) was found.

The massive sulphide horizon occurs along a steep south facing slope, strikes east-west and dips at approximately 45° towards the north. The massive sulphide horizon is hosted towards the base of a sequence of carbonaceous phyllites at the contact with underlying maroon-green phyllites. The horizon is locally associated with the development of chert beds within the sequence. A number of faults are interpreted to offset the horizon locally.

The first drill hole (HR18-01) was located above the massive sulphide horizon up slope to the north and drilled vertically so as to intersect the massive sulphide at a shallow position and confirm the dip of the VMS horizon. It intersected 1.4m at 17.4% zinc, 3.9% lead, 1.6% copper, 90g/t silver and 0.2g/t gold from 48.25m down hole, for 25.8% zinc equivalent (ZnEq).

The second drill hole (HR18-02) targeted the massive sulphide horizon down-dip to the north from the same location. Both drill holes intersected massive sulphide mineralisation with high grade zinc, similar to the discovery outcrop. It intersected 1.8m at 13.8% zinc, 3.1% lead, 0.9% copper, 56g/t silver and 0.2g/t gold from 60.84m down hole, for 19.5% ZnEq.

Subsequently, a third hole (HR18-04) was drilled a further 80m down-dip and 5cm of massive sulphide within a 30cm interval of laminated pyrite was intersected. While HR18-04 didn’t intersect significant massive sulphide, the mineralisation at Hunter appears analogous to that at West Tundra, located nine kilometres to the east-northeast. 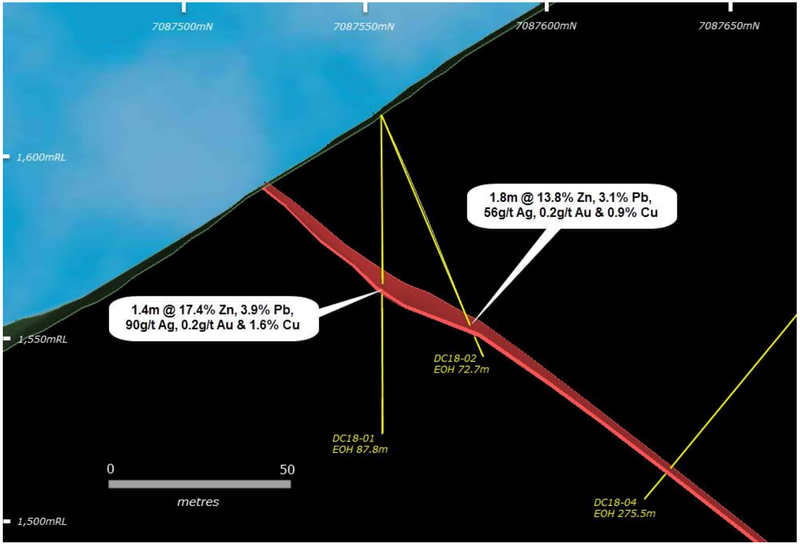 The Hunter prospect remains open down dip, and the VMS horizon that hosts this prospect has been traced for over 500 metres on the surface. The drill rig has now moved to test another new target at the South Platypus prospect, three kilometres east of the Hunter prospect.

MD and CEO Matt Gill said, “There aren’t many places in this world where you find outcropping zinc-rich massive sulphide (with lead, copper, silver and gold) and then promptly drill test that and get a positive response. We are excited by the success of our first field season in Alaska at the Red Mountain project. Through an aggressive approach deploying a drill rig early on the tail of geological prospecting, surface sampling and ground geophysics, we have been rewarded with the discovery of massive sulphide mineralisation in outcrop within three months of starting our very first program. Mapping and drilling has now illustrated that the Hunter prospect has scale for more detailed drill evaluations in the coming year.

“The high-grade zinc results from the first two drill holes have confirmed mineralisation sampled from the discovery outcrop. While the third hole intersected a narrower band of massive sulphide, we know from the West Tundra deposit (9km to the west) that occasionally the VMS horizon pinches locally, but the potential remains high for good thickness and grade along strike and further down dip. Significantly, Hunter also contains around 1% copper.

“The discovery of a new massive sulphide occurrence at Hunter goes a long way to supporting the thesis that the Red Mountain project has the potential to host multiple deposits and expand into a true VMS camp. The Hunter discovery shows that our tenement package could be hiding several other massive sulphide deposits ripe for discovery through systematic ground coverage and the application of modern geochemistry and geophysics techniques which we have been using this field season.”