Hardey Resources (ASX:HDY) this morning confirmed that its 100%-owned Grace Project in the Telfer Region of Western Australia has potential for 186,000 ounces of contained gold.

The Mineral Resource estimate has been carried out on a portion of the mineralised zone at Grace (1140 metre strike length of a total strike length of 4130 metres). The Resource estimate is supported by drilling at an adequate spacing, and use of appropriate techniques (RC and diamond core). The remainder of the mineralisation is delineated by RAB drilling and wide spaced RC and diamond core drilling.

The Mineral Resource is open along strike and at depth, and does not incorporate the results of the recent review completed by HDY which indicated the potential for high grade mineralisation to be controlled by flat-lying, north-west dipping structures.

In addition to the Mineral Resource, HDY has defined an exploration target of between 2.2 and 2.8 million tons at a grade between 0.9 and 1.3 g/t, which corresponds to a potential content of between 64,000 and 117,000 ounces of gold.

The exploration target is based on mineralisation intersected in both near surface RAB drilling and deep diamond drilling. However, these are conceptual figures and there is insufficient exploration in this area to date to estimate a Mineral Resource. 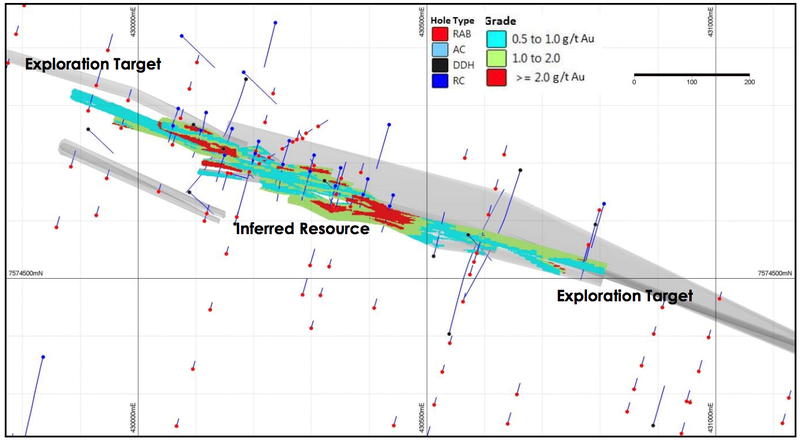 There was copper mineralisation observed in drilling at Grace but it hasn’t been modelled due to insufficient data spacing. HDY expect to complete further drilling to enable copper-bearing zones to be more accurately correlated with lithological or structural information. This could then be incorporated in any future Mineral Resource estimations.

A drill tender is currently in progress for upcoming drill programmes, while heritage surveys are scheduled for early April.

HDY Executive Director, Terence Clee, commented: “The maiden Inferred Mineral Resource is the first step in building a robust economic gold resource at Grace. The resource modelling has allowed for efficient drill planning for the upcoming drill programs to ensure targeting of the most critical areas to rapidly expand the Mineral Resource.

“The technical team have been diligently working with the necessary third parties to fast-track the on-ground work that will deliver the most value for the company and our shareholders,” he said.

Today’s news follows an announcement by HDY yesterday that Robin Armstrong will be re-joining the company’s board. Armstrong is a former HDY director who has a long association with the company and its Burraga Project.