Overall, the consultant believes there is ample evidence, given widespread occurrences of Hardey Formation and Mount Roe Basalt, to verify material exploration upside for conglomerate hosted-gold mineralisation, especially for the Bellary project which is contiguous to Novo Resources (TSX-V:NVO) ground near Tom Price.

Clear positive observations from the report that demonstrate the potential for material exploration upside across the four projects include:

HDY’s Board is now reviewing plans to fast-track a high-level exploration program to garner a greater understanding of the underlying conglomerate gold-hosted mineralisation across the four projects.

The Board considers this updated overview timely as it can now confirm it has recently been approached by Australian and international groups interested in the four projects.

Interestingly, the consultants’ review highlighted the potential for sub-surface target mineralisation, particularly the Bellary project which is contiguous to NVO’s tenure. The geology consultant has recommended closer scrutiny of this project, given it has numerous conglomerate-hosted gold formations.

HDY has four conglomerate-hosted gold projects in the Pilbara region that are within the Lower Fortescue Group — Bellary, Elsie North, Hammersley and Cheela. Of these, Bellary and Elsie North are contiguous to high profile NVO’s ground. 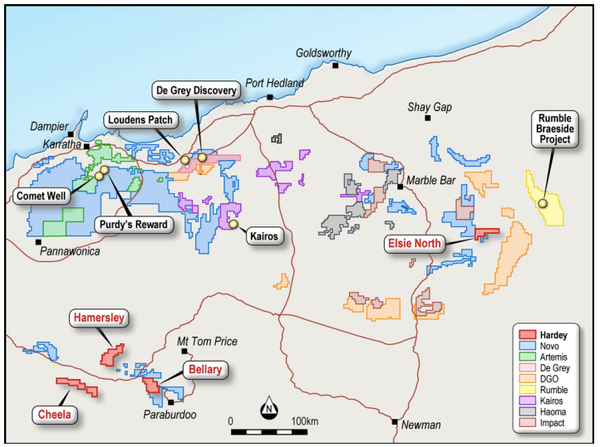 HDY stated that a key takeaway from the report was the clear need to progress with an advanced exploration program as soon as possible, given the positive findings.

A priority for the Board now is to optimise the Pilbara conglomerate-gold hosted assets through leveraging the expertise of a high calibre strategic partner, with a focus on the Bellary project.

HDY Executive Chairman, Terence Clee commented on today’s announcement: “While considerable resources have been devoted to closing out the two vanadium transactions, our geology consultants have been conducting reviews on the gold assets.

“This initial update on Cheela, Bellary, Hammersley and Elsie North is highly encouraging, particularly the prospect of subsurface target mineralisation being apparent. More importantly, recent approaches by Australian and international groups is timely, with the Board seeking to optimise these assets through bringing in prospective strategic partners,” he said.

Next steps for Hardey

HDY remains focussed on its newly acquired vanadium projects, while at the same time optimising legacy assets. According to the company, this twin objective is being progressed to maximise value for shareholders.

For the conglomerate-hosted gold assets under review, particularly the Bellary project, the key next steps are commencing the high level exploration program and opening discussions with prospective strategic partners.