Encouragingly, these findings confirm that all four projects are situated within an enriched vanadium mineralised zone, with considerable exploration upside. They also suggest potential for modelling a JORC (2012)-compliant Inferred vanadium Resource.

This is a key positive at this early stage of the due diligence review, materially de-risking the four Queensland projects.

Historic surface sampling and drill-hole assay results within the region confirm this finding. Moreover, HDY’s peers, Intermin Resources (ASX:IRC) and Liontown Resources (ASX:LTR), have confirmed Resources along strike that align with the Sharptooth Project and within the Toolebuc Formation.

The Sharptooth Project has five historical drill-holes with vanadium oxide assay values up to 0.32% — this exceeds LTR’s average grade but is in line with IRC’s reading.

The Sharptooth Project’s location in relation to nearby peers: 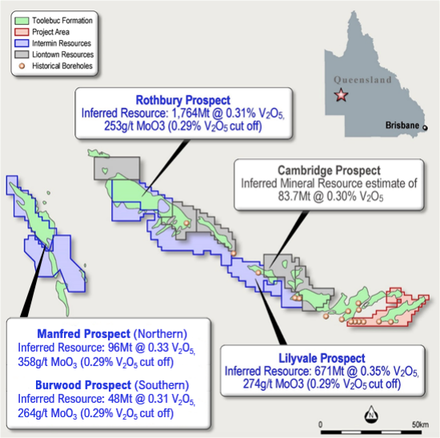 There are some 170 air-core drill-holes, averaging 30 metres in depth, across the north-south trending Spike, Cera and Petrie Projects (completed in 2010), which have a combined 150 kilometre strike length, with widespread elevated vanadium oxide assay results.

This brings HDY one step closer to its aim to emerge as a vanadium supplier to the renewable energy sector.

Moving forward, HDY’s focus will be expanding the area of historic drill-hole interpretation to extrapolate the data across the projects, which have a strike length of 150 kilometres, with the aim of defining an exploration target.

HDY will complete further work to ascertain if a JORC-compliant Resource can be determined from historic data — the company will then progress due diligence on its Northern Territory assets. 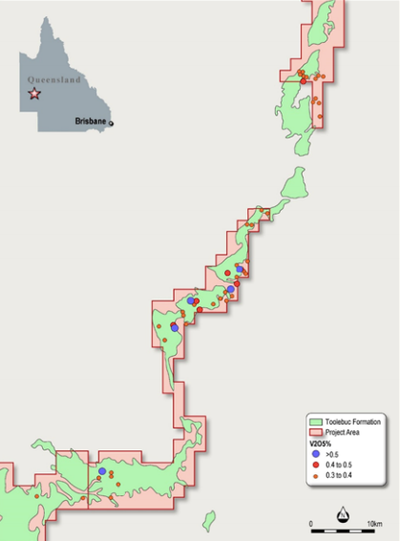 HDY Executive Chairman, Terence Clee, said that these early due diligence findings are “highly encouraging” — especially the confirmed prevalence of the Toolebuc Formation across the projects.

“More significantly, the Board is delighted with the prospect of being able to model a JORC compliant inferred vanadium pentoxide resource, as this materially de-risks this Queensland projects,” said Clee.