Hardey Resources Limited (ASX:HDY) has entered into an agreement aimed at facilitating the acquisition of a company that owns a vanadium mine that has produced high-grade ore in the past.

The company has entered into a share sale agreement with the shareholders of Nelly Vanadium Pty Ltd (NVPL), owners of the Nelly Vanadium Mine in San Luis Province in Argentina.

Under the terms of this agreement, Hardey has been granted a 40-day option to acquire 100% of the issued capital of NVPL.

Hardey Resources’ non-executive director, Terrence Clee highlighted the compelling near term outlook for the Nelly Vanadium Mine in saying, “Upon finalising the acquisition, the Board’s focus will be on undertaking exploration activities with the aim of proving up a JORC compliant resource and moving to re-open the Nelly Vanadium Mine.”

There is still a lot of work to do here, so investors should seek professional financial advice for further information before making an investment decision.

The Nelly Vanadium Mine comprises several vanadium-rich polymetallic sheeted vein systems, aligned north-east to south-west, that are approximately one kilometre long and up to 5.5 metres wide. 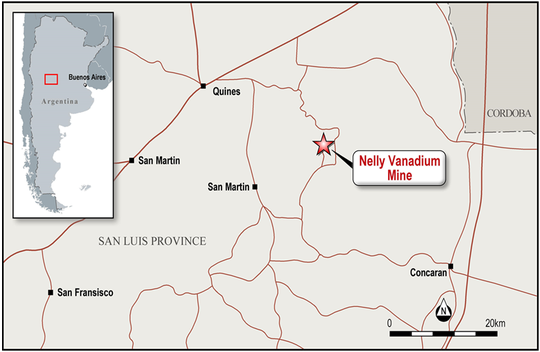 Of significance in determining the potential scope for resource extension, when Nelly was operating between 1949-57 only one vein was partially exploited, leaving most of the deposit intact.

Past sampling and assay results throughout the historical workings produced grades from the partially mined vein that ranged up to 1.9% vanadium with a length weighted sample average of 0.82 per cent vanadium.

NVM has access to reliable power and water, while there is a transport infrastructure connecting the mine to key ports.

The Nelly mine is on a 53-hectare tenement 170 kilometres from the capital of San Luis Province in Argentina.

The mine has ready access to mains power and water supplies, while nearby towns can provide supporting services and skilled labour.

Transportation infrastructure from the mine to key ports will allow the company to access major end markets.

Modern technology should see an uptick in production

This level of production is fairly moderate by today’s standards, as at that time concentration processes were at an experimental stage, preventing the attainment of critical scale.

The primary customers during the 1950s in Argentina were national alloy and acid manufacturers.

During the 1950s, Nelly Vanadium was one of the few operating mines that had an on-site processing plant and accommodation for employees, arguably reflecting the significance of the deposit.

The mine was initially developed as an open pit, and subsequently underground galleries were progressed, but there is extensive scope for exploration of existing veins at depth.

Studies undertaken and samples extracted most recently in 1974 have indicated that there is the presence of other base and precious metals.

In 2017, assay results on samples taken from the open pit and tailings confirmed high-grade mineralisation with up to 1.6 per cent vanadium oxide, confirming the high grades historically mined.

When Nelly Vanadium was operating during the 1950s, only part of the known resource was exploited, leaving most of the untapped mineralisation intact.

The extent of the resource will be a key focus in coming months, quite possibly offering considerable exploration upside.

The economic viability of developing vanadium projects has improved substantially as a result of a strong rally in the commodity price.

Hardey is optimistic that demand for vanadium will remain robust over the next few years, as structural changes augur favourably for the continued expansion of the renewable battery sector. 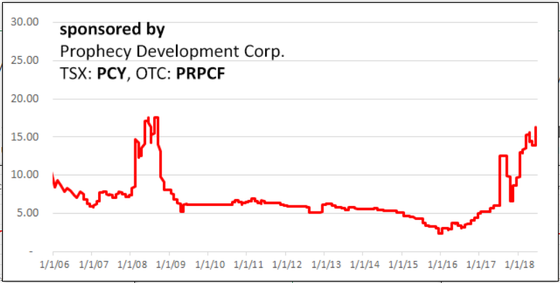 Indeed, the vanadium price is looking strong, as indicated above, trading in the vicinity of US$16.30 per pound.

This is pushing up towards levels not seen since 2008/09.

Is vanadium the next cobalt?

As a battery material, it has been supported by similar momentum that has driven the likes of cobalt to extraordinary highs.

With the price having more than doubled in the last 12 months and evidence of sustained momentum in recent trading there could well be further upside.

Analysts have been warming to vanadium since the start of the year as it has the potential to follow in the footsteps of other highflying battery materials stocks such as cobalt and lithium.

Supply shortages, due to China shutting polluting mines, coupled with accelerating demand from the renewable battery sector, have underpinned a substantial increase in the vanadium price over the past 2 to 3 years.

As management highlighted, this much improved supply/demand environment has led to an increase in investment in developing new vanadium supply chains globally, a factor that should make the economics of reopening the Nelly mine very attractive.

Is Hardey the next 1500 per cent+ King River

This has rubbed off on a number of stocks on the ASX with one notable smallcap in King River Copper (ASX:KRC), which has a vanadium project in Western Australia, delivering outstanding returns in fiscal 2018. 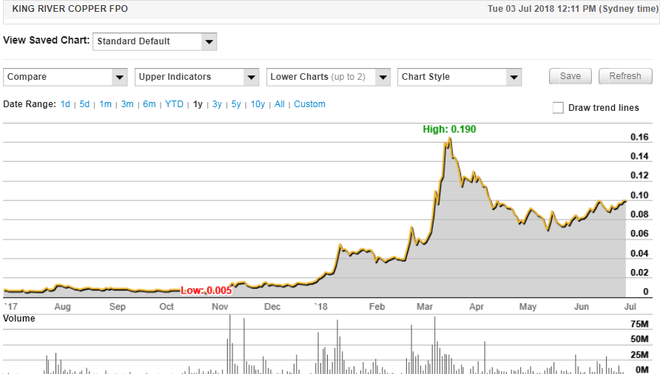 Running the numbers for the highest share price gains for stocks with a market capitalisation between $50 million and $500 million between July 1, 2017 and June 30, 2018, King River Copper comes in at number three with a year-on-year gain of 1516 per cent.

Only recently, King River released some comparative data referring to grades of deposits (indicated by the red line in the bar chart below).

This makes interesting reading in light of the fact that a length weighted sample average grade at the Nelly mine is 0.82 per cent, but in particular, partially mined veins and recent samples have delivered grades of up to 1.9 per cent and 1.6 per cent respectively. 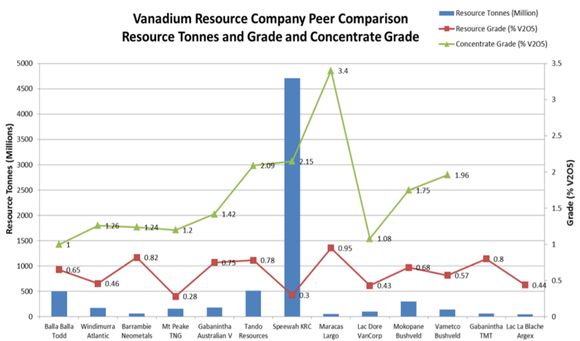 Near-term projects should be well supported

Strong industry momentum should work in favour of Hardey as it strives to bring the Nelly project into production relatively quickly.

Of course it still has some work to do to make this happen, so investors should seek professional financial advice if considering this stock for their portfolio.

The other factor that could well come into play as investors embrace vanadium stocks is the issue of financing.

Often this is a stumbling block for smaller players, but as has been evidenced in the cobalt sector, investors are keen to get a piece of emerging growth stories with a positive macro theme.

As Argentina’s laws enable mining licences to be reactivated relatively quickly, an application is being prepared and will soon be lodged with the regulator.

While reactivation of the mining licence is considered somewhat of a formality, receiving the go-ahead could well be a share price catalyst.