The Meekatharra Project is situated 55 kilometres south of Meekatharra, and is underlain by a sequence of mafic and felsic volcanics, which host a number of VMS base metal prospects and deposits, within and adjacent GTR’s project — these include the Austin VMS deposit, which is located within an excised licence in the southern-central part of the project area, as well as the Murchison Wonder, Tasman and Flinders prospects to the northeast.

The Austin VMS deposit contains a JORC-compliant mineral Resource, comprising Measured, Indicated and Inferred categories of 1.48 Mt at 1.02 per cent copper, 1.39 per cent zinc, 3.51 grams per tonne silver and 0.25 grams per tonne gold.

Exploration by earlier workers identified two VMS prospects within the Meekatharra Project — the Defiance and 4E prospects, which have returned anomalous copper and zinc results, including 4m at 0.18 per cent copper, 8m at 0.34 per cent zinc and 10m at 0.23 per cent copper, from first pass drilling completed during 2010.

Exploration of these two prospects is at an early stage, with only three RC drill holes having been completed to a maximum depth of 252 metres. 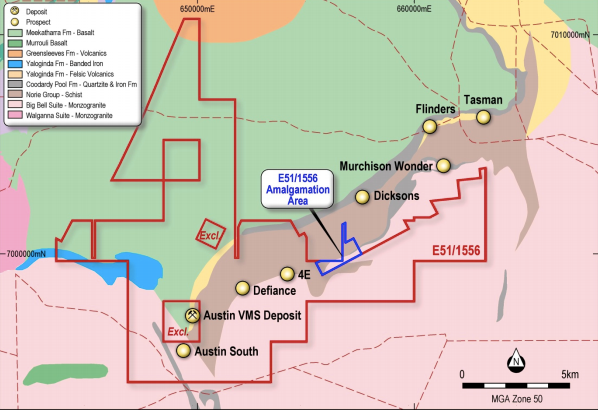 RC drill hole WKRC-4 targeted the centre of the Defiance prospect. The hole intersected a zone of interlayered silica–magnetite ironstones and chlorite-altered felsic volcanic rocks with significant stringer and disseminated sulphides, between 136 and 156m. Assay results include 4m at 0.17 per cent copper from 144 to 148m, and 8m at 0.34 per cent zinc from 148 to 156m.

The 4E prospect, on the other hand, is located 2 kilometres along strike to the east of the Defiance prospect and occurs as a bulls-eye magnetic feature approximately 400 metres in diameter.

GTR’s on-ground exploration programs will target the prospective felsic lithologies along strike to the northeast of the Austin deposit and to the east of the Defiance and 4E prospects.

On top of this, GTR continues to hold preliminary discussions with interested parties relating to new mining opportunities.