Graphite results and proposed acquisition to bring Ardiden under the spotlight

Strategic international metals group, Ardiden (ASX:ADV) has released important news regarding its graphite project located in Canada, as well as advising the market that it has entered into an option agreement to acquire a cobalt-copper-nickel project in Ontario.

The latter was originally discovered in 1992 and during a period of subsequent exploration a number of sulphide zones were identified, confirming the potential for cobalt, copper and nickel mineralisation.

While this was only a grab sampling program, the returned non-JORC grades of 0.3% cobalt 5.54% copper and 0.7% nickel provide some insight into the project’s prospectivity.

Of course, this is an early stage play and investors should seek professional financial advice if considering this stock for their portfolio.

The proposed acquisition is the Bold Property Project located 50 kilometres north-east of the town of Mine Centre in Ontario, less than three hour’s drive from Thunder Bay, a leading regional mining jurisdiction in Ontario with key local infrastructure including a skilled mining workforce and excellent local logistics and infrastructure.

Entering the cobalt space should be seen as a positive move given the company’s broader focus on new age metals with applications in power storage such as lithium and graphite. 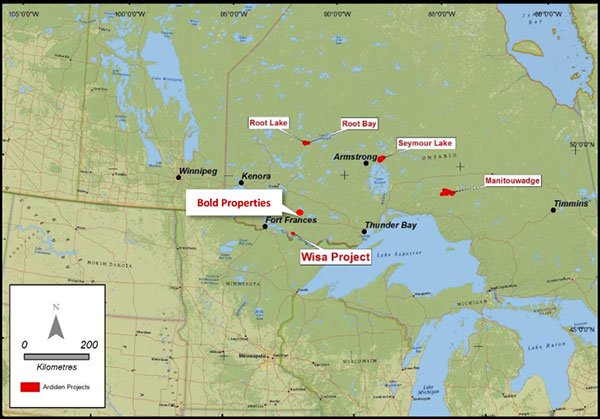 However, it could be ADV’s progress at its graphite project that ignites investor interest on Monday morning after the company announced initial assay results from its Manitouwadge graphite project in Ontario after the market closed on Friday.

This jumbo flake graphite project covers an area of 5300 hectares and has a 20 kilometre strike length of electromagnetic anomalies with graphite prospectivity.

The average grade of the graphite mineralised zones in each of the diamond drill holes ranged from 1.4% to 3.9% total graphitic carbon.

Management said some of the holes intersected multiple high-grade lodes within the broader mineralised envelope, including impressive individual grades of up to 24.5% total graphitic carbon.

The results of assays taken from 16 other holes are imminent.