Gold junior EganStreet muscles in on Rothsay Project in WA

EganStreet (ASX:EGA) is an emerging WA gold company focused on exploring and developing the Rothsay Gold Project, which is situated 300 kilometres north-east of Perth in WA’s midwest region.

The Rothsay Gold Project currently hosts high-grade Mineral Resources of 401koz at an average grade of 8.8g/t gold (Indicated 820kt at 9.3g/t gold and Inferred 600kt at 8.0g/t gold) and a production target of 2.1Mt mined and 1.4Mt processed at 6.9g/t gold for 250koz of gold produced.

As it announced to the market yesterday, the company is continuing to make strong progress with pre-development, permitting and ongoing Resource development activities at Rothsay.

Following on from that, a number of work programs are now underway, aiming to advance Rothsay towards construction and development.

Initial site-based civil works are scheduled to kick off as early as next month, with major construction activities scheduled for Q1 2019, and first gold targeted for Q4 2019.

This program is now well-advanced and already generating highly encouraging initial results, which point to extending the Mineral Resource south in both the Woodley’s and Woodley’s East Shears. To date, 10 holes have been completed.

Bonanza grades have been received from the first two holes assayed on the southern boundary of the Woodley’s and Woodley’s East Mineral Resources, including:

Results confirm that mineralisation on both the Woodley’s and Woodley’s East Shears remains open to the south, in an area that has never previously been drill tested.

Given the high grade of these latest intersections, infill drilling in this region has the potential to increase the current Resource of 1.42Mt at 8.8g/t for 401,000 ounces of contained gold. 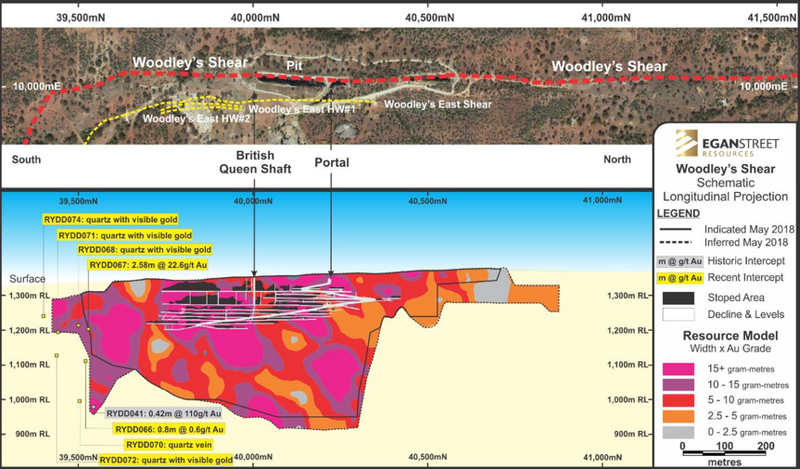 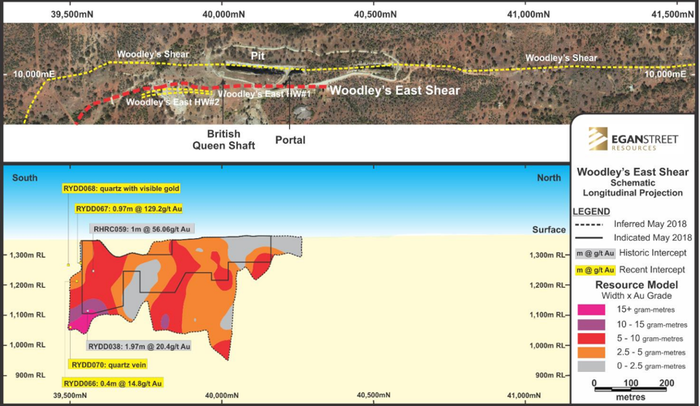 Follow-up reverse-circulation (RC) drilling is planned to test the shallow, up dip extensions of the mineralised shears, with further diamond drilling now also in the works to extend drill coverage to the south. This work will be completed in parallel with the planned development works at Rothsay.

All holes drilled to date are on the southern boundary or outside the May 2018 MRE. As such, given the positive results so far, there is considerable potential to extend Mineral Resources on Woodley’s and Woodley’s East Shears further south, as those zones are open and contain high-grade results at their southern extremities.

To date, 10 holes have been logged and sampled, with seven submitted for assay. Further results from the current program are expected within the next few weeks. The balance of assays from the most recent RC drilling program at Rothsay are still pending.

On top of that, procurement of major packages for the development of the Rothsay Project, as well as key contractor proposals, is also progressing well.

Underground mining contract procurement will begin in Q4 this year.

The team has also appointed an experienced construction manager as the project continues to ramp up. Further appointments are scheduled later on this month.

Further to that, project approvals are now in their final stages, with the Mining Proposal and Project Management Plan submitted to the Department of Mines, Industry Regulation & Safety (DMIRS). Additional approvals are expected to be progressed during the December quarter.

PCF Capital Group (PCF), EGA’s financial advisor, has begun engaging with a range of financing groups. A Financing Information Memorandum outlining the Rothsay opportunity has been provided to help these groups better understand the project, with a financing solution anticipated to be completed over the coming months.

EGA’s longer-term growth aspirations are based on a strategy of utilising the cash-flow generated by an initial mining operation at Rothsay to target extensions of the main deposit and explore the surrounding tenements, which include a 14 kilometre strike length of highly prospective and virtually unexplored stratigraphy.