The intersection of multiple zones of semi-massive pyrite veining in TCDD003 is similar to that hosting significant cobalt mineralisation associated with sulphide veining in TCDD001, which was reported on July 11.

Drill hole TCDD003 ended at 357.90m and targeted a large IP chargeability anomaly directly below a surface sampling location which was sampled in 2017 and returned results including, 3300ppm cobalt, 1.52% copper and 0.59 g/t gold from saprolitic bedrock beneath peaty soil cover.

The inclined hole (-550 dip, 0450 azimuth) intersected disseminated pyrite (trace to 5%) within altered andesites and monzodiorites throughout the hole.

A number of mineralised zones of semi-massive and stringer pyrite veining within zones of coarsely disseminated pyrite, were encountered in TCDD003, including;

Drill hole TCDD003 targeted a large chargeable IP anomaly located along the eastern margin of an ovoid aeromagnetic body, below a surface copper-cobalt anomaly. The chargeable anomaly has dimensions of approximately 400m width by 600 metres in length. The depth to the top of the IP anomaly is approximately 100m below the surface. 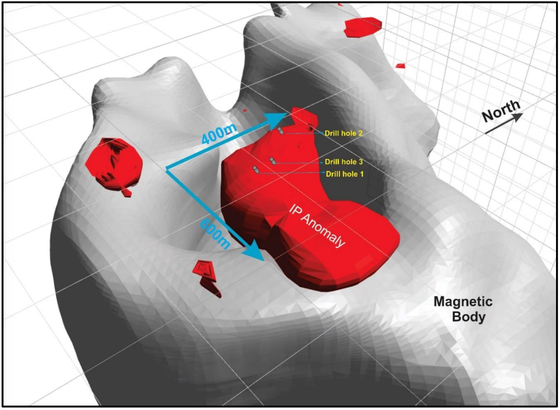 The findings are highly encouraging and confirm the potential of the Thomas Creek copper-cobalt prospect to host further mineralisation in this large and relatively untested target.