eSense-Lab Limited (ASX:ESE) is executing on its expansion into the US market — the world’s largest consumer base for terpene based products — entering an exclusive sales agency agreement with Blue Science Solutions LLC for the distribution of its future terpene based sanitiser products.

The agreement provides Blue Science with exclusivity for the US market, subject to achieving the minimum product sales. In the event these minimum sales targets are not achieved, the agreement will automatically become non-exclusive.

eSense has experienced strong investor support over the last three months as the company has progressed its established businesses and expanded into new areas, resulting in its share price increasing as much as three-fold during that period. 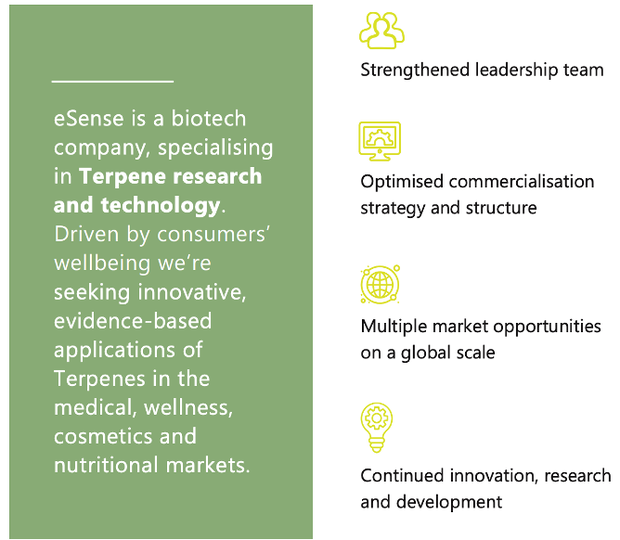 The exclusive sales agency agreement announced today covers all terpenes-based products to be developed by eSense, both in conjunction with Blue Science and with other third parties, in the cleaning and disinfecting solutions market segment.

Blue Science uses only natural ingredients to deliver non-toxic cleaning and disinfecting solutions that have applications across a variety of industries. It is the exclusive holder/licensee and applicant of several patents for sanitisation and disinfection products for FDA and EPA regulated industries. The US based company will bring valuable knowledge for future product development and inclusion.

eSense management emphasised that it is still finalising product formulations, which are expected to take two to three months to complete, and pricing for terpenes-based sanitiser products in this market segment.

The company expect its first product — a terpenes-based sanitiser product — to be ready for manufacture in the next four to six months. It is anticipated that this product will only require a basic FDA registration as a no-rinse hand decontaminating solution.

Thereafter, other products are expected to be finalised for manufacture as and when the R&D team finalises product formulations.

Under the terms of the agreement, eSense has agreed to issue 10 million CDIs in the capital of the company (approximately 2% of the issued and outstanding CDIs) to Blue Science (or its nominees) at a deemed issue price of $0.01 each in return for Blue Science agreeing to distribute its products through its networks. The agreement incorporates Blue Science receiving an arm’s-length standard commission on all sales.

Blue Science intends to fast-track and utilise its experience in the North American markets to define the most suitable sales and distribution channels, as well as act as a local agent for eSense products in the US.

Blue Science will provide eSense with a number of benefits including a cost-effective entry point to the US market via an established supply chain network, plus a viable solution logistically for entry of the company’s terpenes-based products into the world’s largest consumer networks.

This exclusive sales agency agreement also provides eSense with access to a team of experienced scientists who have a proven track record of developing commercially viable products, including registered industrial professional hygienists, enzyme and organic chemists, and intellectual property attorneys, among others.

Another fact that won’t have gone unnoticed by eSense management is that Blue Science is an approved supplier to the IBM Rapid Supplier Connect initiative where it intends to introduce future products for sale through its supply chains.

The IBM Rapid Supplier Connect network is designed to provide support for supplier identity using blockchain technology. It aims to help buyers in the U.S. and Canadian healthcare and government sectors including hospitals, state procurement divisions, medical device makers, pharmacies and state and local governments, to find supplies and services

The network aims to help buyers in the US and Canadian healthcare and government sectors including hospitals, state procurement divisions, medical device makers, pharmacies and state and local governments, to find supplies and services in an unconventional marketplace with greater efficiency.

After averaging over US$2.5 million in revenue in its last two financial years, Blue Science has experienced an increase in demand for sanitiser products in line with a global shortage and expects significant revenue growth this year.

The commitment by Blue Science for product sales of A$10 million over five years should assist in increasing eSense’s earnings profile at the same time as reducing the costs associated in establishing a distribution and sales network in the US.