ERL undertook the drilling programme with the aim of increasing its confidence in the gold mineralisation beneath the open pit, converting some Inferred resources to Indicated, and to obtaining important additional geotechnical data for ongoing underground mining studies.

Penny Find’s mineralisation extends to 250m below surface and remains open at depth. High grade gold mineralisation is hosted by quartz veins at the contact between sediments and basalt. Testwork has shown fresh mineralisation to be free milling with a high gravity recoverable gold component of 85%.

The best results from the six-hold diamond drill programme were:

These can be seen on the below long section with drill hole pierce points: 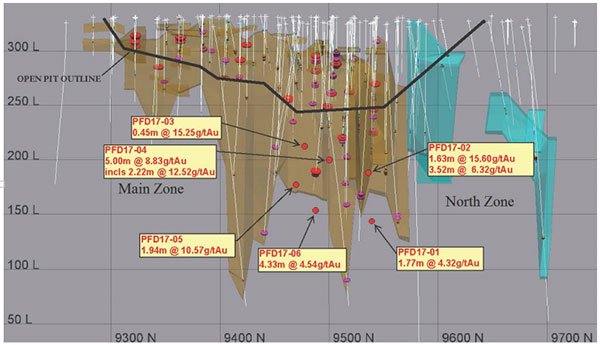 The updated resource estimate is still to be calculated, but once it is done ERL will commence a final underground feasibility study that is expected to be finalised within a few months.

“Results from the recent underground drilling have given us the confidence to move ahead with a final underground feasibility to extend Penny’s Find’s mine life beyond the open pit.

“With gold mineralisation open at depth, there is good potential to add to the current underground Indicated and Inferred resource of 170,000t at 5.40g/t gold.”

Any addition to the Indicated and referred resource is speculative at this stage and investors should seek professional financial advice if considering this stock for their portfolio.

These drill results follow last month’s news that ERL had poured its first gold bar from the open pit operations, with the mine’s ore being toll processed at two nearby regional gold mills.

Going forward, there’s should be plenty of newsflow in the coming months with the updated Resource estimate and final underground feasibility study.