Empire Resources surge as ore is processed and exploration progresses

Gold mining group, Empire Resources (ASX:ERL) informed the market on Wednesday that the company had commenced the second round of grade control drilling at its Penny’s Find project located 50 kilometres north-east of Kalgoorlie in Western Australia.

In discussing the company’s strategy regarding this initiative, Managing Director David Sargeant said, “The program is designed to provide grade control information from between 30 metres to 60 metres in depth in the mine’s open pit, providing further strong confidence in the geological model being used for Penny’s Find”. 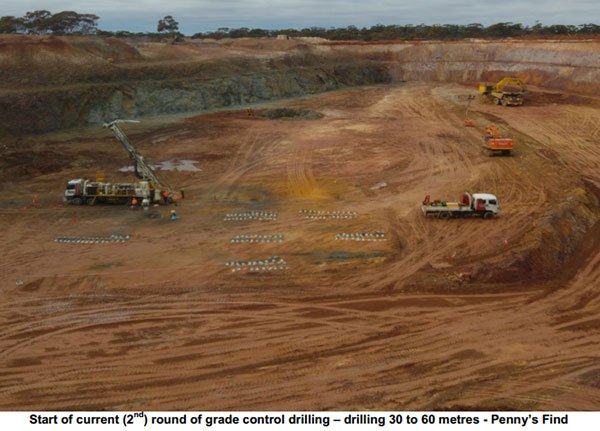 A total of 60 holes will be drilled for 2400 metres, and Sargeant said the open pit is now accessing the higher grade part of the orebody providing an excellent production opportunity given the current high Australian dollar gold price of more than $1600 an ounce.

Indeed, the timing couldn’t be better with the gold price touching US$1300 per ounce last Friday, a level it hadn’t traded at since early November 2016.

Upon completion of the grade control program, the reverse circulation rig will drill six diamond pre-collars in preparation for further testing of the mine’s known underground resource.

Highlighting upcoming near-term share price catalysts, Sargeant said, “We also believe there is substantial upside at Penny’s Find once a feasibility study into development of the underground resource has been completed, and this along with exploration potential at depth bodes well for the long-term future of the project.

In parallel with these developments, ERL has been delivering ore to the Burbanks mill throughout August, and processing will commence shortly.

As management provides guidance regarding the cash flow generated from this production, investors will gain an appreciation of the company’s position in terms of potentially funding a significant underground development.

It appears that investors are becoming increasingly aware of ERL’s near-term prospects with the company’s share price having increased 35% in less than a fortnight. Some heavy buying occurred on Tuesday with more than 7 million shares traded, the largest daily volumes recorded in the last 12 months.

Of course, share trading patterns should not be used as the basis for an investment as they may or may not be replicated. Those considering this stock should seek independent financial advice.